Millennial Media, a market research company, just released its Mobile Mix report for the month of May to give us an idea of how the market is being split between all the major platforms. Wednesday, they released this chart showing us how Android and iOS are currently doing against Windows Phone 7, BlackBerry OS and the rest of the pact. As you might expect, Android is still doing very well, with iPhone not far behind.

The data is collected by using ad impressions served to each operating system as a scale to judge their market share. In April, Android was leading with 53% and looking at last month’s numbers, that’s not a big change. iOS on the other hand lost 1% market share, which might’ve gone to Windows Phone 7, which finally has a significant 1% market share, a .5% jump from April’s results. RIM is staying in there with 17% of all ad impressions going to their phones, but that number has been dropping for quite some time now and next month should bring another loss. Symbian is currently holding the same status next to Windows Phone 7 in the barely-noticeable cracks of the graph.

Millennial also did a graph showing the results of app revenue per OS. iOS still holds the lead with 45% of all ad sales. Android is very close behind, holding 43% of all app revenue for the month of May. These numbers might be due to Android having more free apps than paid app compared to iOS. RIM has 9% of all app sales, and others (Windows Phone 7 and Symbian) hold a sad 3% market share. These numbers don’t tell us actual app downloads just how much money the market is bringing in, which might be important to some.

The last chart has nothing to do with applications or OS share, but more to do with which manufacturer is running the streets. Apple unsurprisingly takes the lead for the 20th month in a roll, and beats out Samsung as number 1 manufacturer based on ad impressions. This should change quickly as the Galaxy S II comes into the picture this summer, since the iPhone 5 won’t be around to compete. RIM still sits quietly at the number 3 spot, beating HTC who came in at 4th place.

All these numbers give us an idea of how the mobile phone space is changing, and considering all of the new developments in the industry, I’m excited to see what the charts show for June. For more details, you can download the full Mobile Mix report over here. 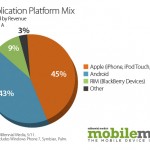 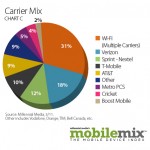 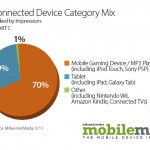 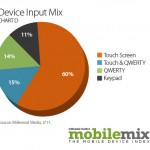 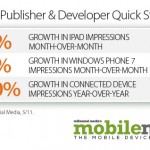 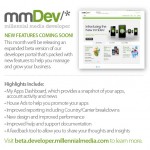 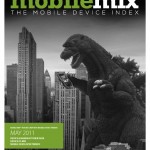 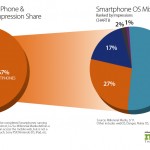 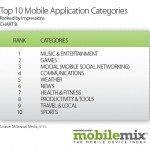 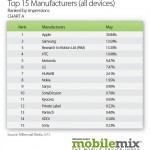 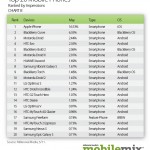 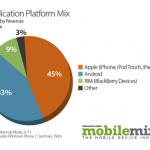 At long last, readers, the first Android Honeycomb tablet that's worth your money is finally upon us, and starting tomorrow...