When it comes to spending money on technology, we’d like to believe we are best at it, but apparently you don’t work for the US government. It appears that after the government gets your tax checks in, they go on a tech shopping spree much like we do when we get our tax returns. Gizmodo went on a digging adventure and turned up with a few good facts about how the government is spending money on technology.

From the information found in the Federal Procurement Data System, the government spends quite a lot of money on consumer tech. President Obama has been quoted before saying “When it comes to technology, we are like 30 years behind.” I guess everyone gets iPad’s, PS3’s, Xbox 360’s, except the President. 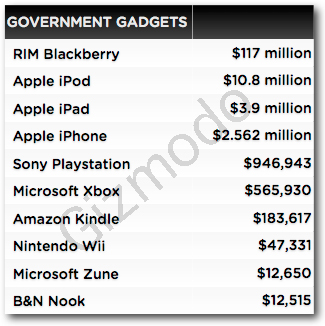 RIM’s BlackBerry phones take the top spot for the expensive technology purchased by the government over the last ten years. $117 million has been spent on acquiring devices and paying for service, which isn’t too surprising given President Obama’s preference for the device. By contrast, only $2.5 million was spent on iPhone devices (though $10.8 was spent on iPods, and $3.9 million on iPads).

In one instance, approximately $663,000 of taxpayer money was spent on Sony’s PlayStation 3 consoles for the Air Force. Now this isn’t just for fun, but I’m sure a few of them were used for games; the purchases put together a supercomputer using the console’s super-powerful processor. Between 2001 and now, the government has spent close to $1 million dollars on PS3’s alone; no wonder my friend stationed in Germany is having so much fun.

Kindle purchases, which include books and everything related to that system, make up $200K in the spending budget. Nook, a system that has been dwarfed by the Amazon’s superior Kindle, cost $12K. Now the most surprising spending in the budget is for the Wii – honestly! Who even plays the Wii?

Nonetheless, this was a good view of how the government is spending money. I am not too shocked by this report, and I won’t be complaining about how they are using our money for the wrong reasons. Most likely a lot of these 360’s and PS3’s that aren’t making up a supercomputer, which the 360 couldn’t do even if it tried, is going to the people fighting for our country and that’s not so bad.

The mobile phone world seems to revolve around the North America, Korean, and UK mobile phone market, but there’s more...