Last week we learned that Google was seeing 550,000 Android activations per day, but according to a recent ChangeWave study, it seems that the demand for iOS is beginning to outpace Android. The two platforms saw equal demand last year and early this year, except for the month of June 2010 when the iPhone 4 was released, but iOS really started to take off in terms of customer preference late this spring.

As of June 2011, with rumors of the iPhone 5 rising and pointing to a September release, 46% of consumers planning to buy a new smartphone in the next two months stated iOS as their preference. By contrast, only 32% said they were considering an Android phone.

RIM doesn’t even seem to be in the running, according to ChangeWave:

Firmly in second in the North American market, the Android OS (32%) has registered a slight uptick (up 1-pt) in terms of future buyer preference. In contrast, Research in Motion’s BlackBerry OS (4%; down 1-pt) has once again hit its lowest level ever in a ChangeWave survey.

Part of the reason for the rise in demand for the iPhone is Apple’s coming cloud service, iCloud. The upcoming feature will allow users to store their contact information, calendar events, photos, videos and other types of media in the cloud for free, and it syncs all that info and media across iOS devices. 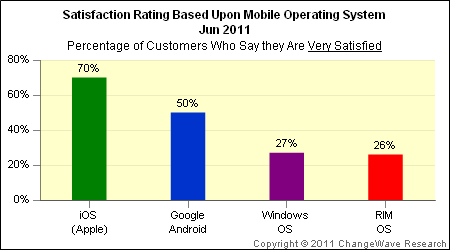 Smartphone platform preference isn’t everything, however, because satisfaction rates are more important. Friends make recommendations to each other based on user experience, and those who are currently dissatisfied with their chosen platform may be looking to jump ship when they can. In terms of customer satisfaction, 70% of iOS users said they were happy with their OS, whereas 50% of Android users were able to say the same.

Apple said two weeks ago that it was aware of an iOS security flaw that could leave iPhone and iPad...