Samsung’s Galaxy potfolio has more devices in it than we care to count. There’s the Galaxy S, the one that started it all; the Galaxy Tab, which came in a 7 inch version that sucked, a more recent 10.1 inch version that’s the best Android tablet on the market, and an 8.9 inch version that we’re still waiting to see; the Galaxy S II, the followup to the Galaxy S that packs a dual core processor and one of, if not the, prettiest screens we’ve seen on a mobile phone; and finally there’s the Galaxy R, or Z (depending on which country you’re in), that’s the cheaper, slightly smaller version of the Galaxy S II. Today the family adds an additional member, the Galaxy XCover. It runs Android 2.3, has a 3.8 inch screen, 3.2 megapixel camera, and we think it has the same processor as the Galaxy S, but we’re not 100% about that. What makes this thing standout is that it’s IP67 rated, meaning you can drop it, soak it, blow it up, use it as a hammer, or stick it in your microwave, and it’ll survive. No word on cost, but at least we do know it’s going to hit the market in October in Germany. 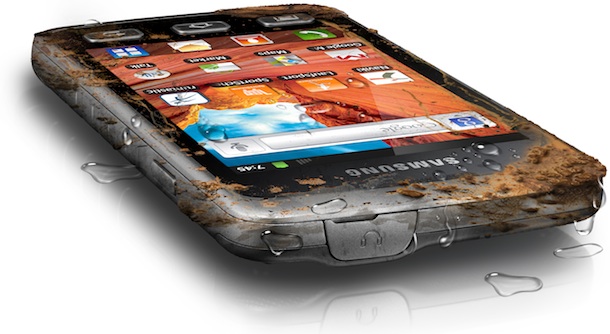 If you’re looking at rugged smartphones in general, don’t forget to consider the Motorola Defy+, which will start shipping in September for roughly 300 Euros, or the Sony Ericsson Xperia Active, which is unique because it’s not only rugged, but it also sports a tiny 3 inch screen. If you want our advice, just get whatever smartphone you want, and then stick it in an OtterBox. Those things are damn near bulletproof, and you don’t have to limit yourself to the few ruggedized options out on the market.

Seriously though, besides construction workers, do any of you actually use these indestructible phones?

About 14 hours ago we reported that Taiwanese handset vendor HTC was going to be announcing "major news today". Thanks...