If you thought you were dead set on the upcoming Motorola Droid Bionic, then you may want to take a look at this nifty little thing here, the Droid HD. There’s little known about the handset itself but it’s easy to see that it’s one of Motorola’s hottest phones we’ve seen to date.

Taking some subtle cues from the Photon 4G, the Droid HD has slightly curved edges at the end but aren’t dramatic enough to be called octagonal like its WiMAX-toting brother. Coming in with a 4.5 inch display, the handset could, if we’re lucky, ship with a 720p (1280 x 720) display. That said, we’re just going to assume it’s the standard qHD display found on existing Motorola phones, which aren’t anything to write home about. Nonetheless, even with the little we do know about this phone, we’re beginning to think we already want it over the Bionic.

One thing we’re definitely excited to see if just how thin the Droid HD is.  Because of its thinness, it may be easy to assume that it won’t be a LTE device, which is fine by us. Much like the Infuse 4G and Galaxy S 2, the large, almost unwieldy displays are counteracted by their thinness, and it looks to be the case for Moto’s new handset. Other pictures reveal the Droid HD to be a world phone, as a SIM card slot sits next to the microSD card slot. You’ll also be able to shoot some 1080p HD video goodness with the 8 megapixel camera. 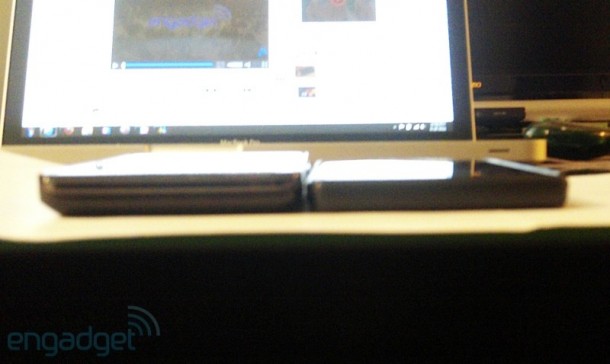 Now the question is when we’ll actually see this device and whether or not it can take on the competition when it debuts. Honestly, Motorola phones rarely impress me and even with the little we do know about the Droid HD, I’m intrigued.

Hopefully this is the beginning of a long string of leaks for the Droid HD.