Yet another great game optimized for the Tegra 2 processor is Sprinkle, a simple, yet addicting game that’s sure to entertain. Your town is on fire and your job to put out all the fires, which are blocked by a series of puzzling blockades.To do this, you’re given a fire hose that can only move up, down, and tilt forward and back to adjust the stream of water.

When I first sat down with the game and started playing, I wasn’t too sure what I was doing. It’s easy enough to put out the fires in the first few levels, as they are the most straight-forward. As you’d expect, playing further becomes more difficult but the puzzles are quite interesting and require a good amount of thought. Sprinkle is the kind of game that will stump you and you’ll put it down for a while, only to pick it back up and just “get it” the next time you try.

While the name of the game is to get all the fires out, it doesn’t come as easy as you’d think. Most of the time you’ll need to put the fires in a certain order, or move a stone block to a certain place so the water will hit the right angle and take out the next fire. While your time isn’t limited, the amount of water you’re given to put out the fires is and if you don’t utilize all that H2o just right, you’re done for. Or, your village is, at least. 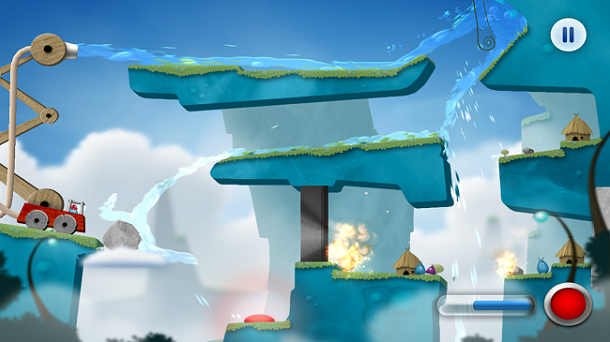 Because the game has been optimized for the NVIDIA Tegra 2, you can expect to see the best in class graphics we’ve come to expect, and Sprinkle delivers. Like RipTide GP, the water physics behind the game are stunning. One of the best things about Sprinkle, other than the fact that it becomes terribly addicting is that it’s only $1.99, which is more than affordable for a game like this and you’ll be glad you grabbed it.

Two bucks for 46 levels of town-drowning fun should be more than worth it.

But that’s not all! Well, for now it is, but you’ll be happy to know that another version of Sprinkle is on the way, optimized for the Kal-El, NVIDIA’s next generation quad-core processor, which should knock your socks off.

Head over to the Android Market or the just released TegraZone.com to get your Sprinkle on now!

While we're not sure if an iPad can replace a laptop, the Tampa Bay Buccaneers are using Apple's tablet to...