The U.S government is suing to block the AT&T, T-Mobile merger because it said the deal would violate anittrust laws and would be a severe blow for competition. This doesn’t mean the mega merger is dead but this is

“AT&T’s elimination of T-Mobile as an independent, low- priced rival would remove a significant competitive force from the market,” the U.S. said in its filing, according to Bloomberg.

The move comes after we’ve heard that AT&T will be keeping T-Mobile’s existing pricing structure after the deal goes through. Besides, T-Mobile users who had rate changes would likely be able to get out of their contracts without an ETF due to the material change in the contract. Of course, they would be losing a choice of carriers to jump to in that scenario.

I was always under the impression that the $39 billion AT&T-Mobile monster was somewhat inevitable, as I thought the FCC would use this to require some divestitures and some open access/free roaming deals. This shows the government actually has some spine for what it believes is good for consumers.

AT&T can still negotiate with the Justice Department, which filed the suit, so don’t think the deal is dead. AT&T will have to pay a few billion to T-Mobile if the deal doesn’t work, so you can be sure it will fight this hard.

You know that somewhere, Dan Hesse is smiling.

[Update] AT&T strikes back with this statement:

We are surprised and disappointed by today’s action, particularly since we have met repeatedly with the Department of Justice and there was no indication from the DOJ that this action was being contemplated.

We plan to ask for an expedited hearing so the enormous benefits of this merger can be fully reviewed. The DOJ has the burden of proving alleged anti-competitive affects and we intend to vigorously contest this matter in court.

At the end of the day, we believe facts will guide any final decision and the facts are clear. This merger will:

· Allow AT&T to expand 4G LTE mobile broadband to another 55 million Americans, or 97% of the population;

· Result in billions of additional investment and tens of thousands of jobs, at a time when our nation needs them most.

We remain confident that this merger is in the best interest of consumers and our country, and the facts will prevail in court. 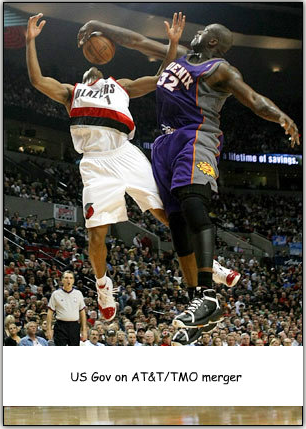 RIM's latest batch of BlackBerry smartphones have been gradually working their way out to various carriers over the last few...