Nielsen just released the latest statistics on smartphone usage in the United States. Slowly but surely, smartphones continue to take over the entire mobile phone industry. As of July 2011, 40 percent of all mobile phones in use are smartphones. The other 60 percent are feature phones, but that number shrinks with every day that goes by.

Nielsen also broke down that 40 percent of smartphones to find operating system market share. Android grabbed hold of 40 percent of all smartphones. Right behind that is iOS with 28 percent. RIM’s BlackBerry is at 19 percent. Oddly, Windows Mobile is still clinging on 7 percent of market share. Windows Mobile is Microsoft’s old mobile OS, later succeeded by Windows Phone. You folks really need to consider making an upgrade. But speaking of Windows Phone, the latest OS to come out of Redmond only captured 1 percent of mobile operating system usage, though things are always changing. All others combined account for the remaining 5 percent.

It’s clear that Android is definitely winning the race in terms of software, but it’s important to know the Apple iPhone wins — by a landslide, I might add — in terms of hardware. Out of the hundreds of Android phones out there, they all add up to 40 percent. There are only four different models of the iPhone, and together they claim 28 percent — an impressive statistic for Apple. 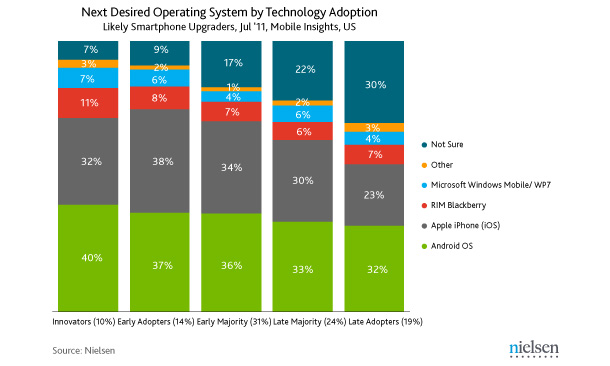 Finally, Nielson goes on to report what operating systems people are interested in for the future. Ranging from innovators to late adopters, the amount of people unsure about their next smartphone increases dramatically. 7 percent of innovators are unsure, as are nearly one third of late adopters. Interest in Windows Mobile, Windows Phone, and RIM’s BlackBerry stay generally within the same range throughout. The majority of consumers are looking to eventually invest in Android. iOS love isn’t lacking either, and early adopters in particular show a slight preference for the iPhone over any Android device.

One of the biggest advantages Android has is choice. With the iPhone, you either love it or hate it. And if you hate it, your love affair with iOS is over. Android is different in that if you don’t like one device, you can move onto a different one without switching operating systems. That’s why Android market share is so high: all the choices. But as for myself, I think I’ll stick with my beloved iPhone. What about you?

Specs of the HTC Omega and Eternity Mango phones are revealed

For about a month we've known HTC's plan of nine upcoming Windows Phone 7 Mango devices. Today, we believe HTC may...