Apple is all set to unveil the next generation iPhone or two tomorrow and we thought we’d comb through the rumors and let you know what to expect. More than any other company, Apple is good at keeping secrets, so while some elements have leaked out, I’m sure there will be a few surprises.

Apple CEO Tim Cook should be the one to unveil the iPhone 5 now that Steve Jobs has stepped down but Jobs may make a special appearance. Cook did introduce the Verizon iPhone 4 and Apple may want to make this event about him and the iPhone 5. We’re guessing it’s going to be just the iPhone 5, as the invitation has a “1” next to the phone icon but rumors still persist about a lower-cost iPhone, maybe called the iPhone 4S. The goal of a lower-cost iPhone would be to enable Apple to potentially halt some of Android’s growth, particularly in the emerging markets. 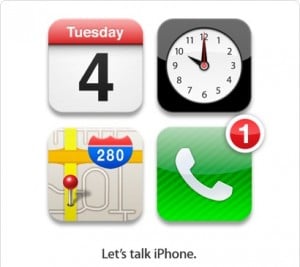 For whatever reason, this iPhone update is coming later than we expected, as Apple released the previous four iPhones in the summer but we’re well into the Fall without a new Apple smartphone. The release schedule hasn’t hurt sales, as Apple sold more phones than ever and the next one should lead to millions of sales in the opening weekend and tens of millions in its first quarter.

As for the iPhone 5 or whatever the next-generation Apple smartphone is called, we’re fully expecting a dual-core A5 processor (the same that’s found in the iPad 2, more RAM, an 8-megapixel camera and potentially a larger screen that’s still considered a Retina Display. A front-facing camera with FaceTime will definitely be on board. The latest rumors suggest that we’re in store for an iPhone 4S, a phone with the iPhone 4 form factor but boosted internals.

Apple always likes to make the hardware thinner and strong voice-controls should be baked in thanks to Apple’s acquisition of Siri. The iPhone 5 is expected to have a voice-controlled Assistant which will make it easy to use your voice to accomplish tasks like sending a text message, scheduling an appointment and more. Rumors say this will require specific hardware needs, so we’re not expecting this to be fully available on the iPhone 4. Android users have had similar functionality for a while now with the Google Voice Action app but Apple will likely have its own spin on it.

We also expect the iPhone 5 to be available on AT&T, Verizon and on Sprint – T-Mobile has essentially admitted it is not getting it. Sprint is expected to be the only carrier which will offer the iPhone 5 with an unlimited plan for new customers, so that may be something to consider. Some reports say the next iPhone will have support for HSPA+ 4G but we’re not holding our breath for 4G LTE support, although that would be pretty sweet. 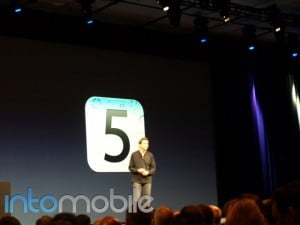 The next iPhone will have iOS 5, which includes a revamped notification system, more tools for developers and the iCloud service. Apple’s iCloud is the company’s take on cloud computing – it’s not a hard drive in the sky but more of a wireless way to make sure your content is available on all your Apple devices. We’ve been playing with iOS 5 for months now and I’m confident in saying that users are really going to like it and I can’t wait to see how developers take advantage of its new features.

The revamped notification system is nice, as you simply pull down a windows front the top of the screen to see your current alerts in a similar manner to Android. Notifications are grouped by app type and when you get a new alert, it pops up at the top of the screen and you can tap it to get into that app. Finally, those annoying pop-up notifications that cover your screen will be gone. Other features include baked-in Twitter integration for handy things like sending pictures to Twitter from the native camera app, photo editing software built in (it’s not great though) and quick access to the camera from the lock screen.

All will be revealed on October 4 and you can be sure we’ll be giving you the latest information. In the meanwhile, let us know what you think in the comments.

The upcoming launch of iOS 5 will bring integrated Twitter experience, potentially flooding the social network's servers. Twitter on its...