Whenever a press release hits the IntoMobile inbox announcing a new Pantech device, an incredibly competitive game of hot potato kicks off. Known for making solid midrange devices, Pantech isn’t a company we’d usually associate with innovation, but that’s due to change real fast. The Pantech Vega LTE, not the most impressive name, but whatever, will be a 4.5 inch Android smartphone with a dual core 1.5 GHz processor and 1 GB of RAM. Said display will have a resolution of 1280 x 720 pixels, making it the fourth smartphone we know of with such an insane display. The others are of course the LG Optimus LTE (South Korea only), the Samsung Galaxy S II HD LTE (South Korea only), and finally the Samsung Galaxy Nexus (rumored to be announced next week!). The Vega LTE looks like it’s a South Korea exclusive for now, but that doesn’t mean it isn’t going to swim across the pond at some point and land on either Verizon’s or AT&T’s store shelves. Other important specs to note is support for near field communications, a less than 9.4 mm (iPhone 4 thickness) body, a massive 1860 mAh battery, and 16 GB of onboard storage. 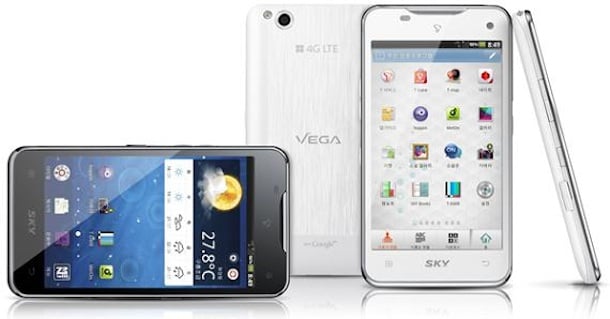 Whether this thing ever leaves South Korea is really unimportant at this point. What the Pantech Vega LTE has done was set our expectations ridiculously high for what we can expect to see at the Consumer Electronics Show in January next year, and then at Mobile World Congress just a short month later. If Pantech of all people can come out with a device with a 720p display, we’re going to assume that 720p displays are going to be ubiquitous in 2012 smartphones. We’ve yet to see one from HTC and Motorola, the former will likely come with a new version of Sense that will make us want to light ourselves on fire, the latter will be most exciting since it’ll probably be the first smartphone released after Google’s gets the green light to swallow up Motorola.