I was pretty thrilled to see American Airlines and Samsung teaming up to give some passengers free Galaxy Tab 10.1 tablets for flights because I’m a huge fan of tablets on planes. I really think there is a huge opportunity to enhance the traveling experience with these devices and more airlines need to embrace tablets.

Two great things about my job is that I get a pile of tablets to test and I travel a lot for conferences (just came back from sunny San Diego and CTIA 2011) and the first aspect really helps the second. While I probably should be working on my laptop those WiFi-equipped planes, I much prefer zoning out to videos on a tablet. I know I’m not alone, as I remember the days of people bringing portable DVD players on planes and tablets can easily do that with so many more capabilities.

American Airlines is dipping its toes into the water by handing out Galaxy Tab 10.1 devices for free to users in business class and first class on certain flights. These devices will be preloaded with content including movies and television shows and will also have free WiFi access and a dock that’s built in to the seats. The company said that the move will be cheaper than replacing in-chair video equipment and it should provide users with a great experience. I don’t think this goes far enough. 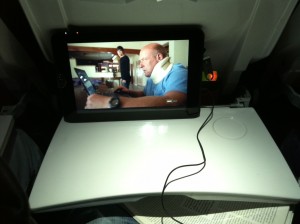 I propose that airlines start renting out tablets during flights over 3 hours (it wouldn’t be the first industry to rent tablets). I’m thinking they should charge about $10, the tablets will be loaded with videos, games, e-books and include free WiFi if the plane has it. In an ideal world, the in-plane tech would be so wonderful that the WiFi is fast enough to stream all the content but that’s not a reality now and may never be, so preloaded content is the way to go. The iPad would be an eye-catching one to rent out but any high-quality Android tablet would do the trick and would probably be cheaper for the airline, particularly if its batch-buying them.

I don’t fly business class or first class, so I’m stuck in the limited space that is coach seating. Even with an ultra-thin MacBook air, using a laptop on that tray table is less than ideal but a tablet is perfect for this space. Whether its an iPad 2, Galaxy Tab 10.1 or even a Toshiba Thrive, using a tablet on a plane is very comfortable. The next time you’re on a plane, take a look around at what people are doing and I’ll bet that you’ll see multiple tablets (probably the iPad).

Even on something like Virgin America with WiFi, plugs and a touchscreen built into every seat, the technology is starting to feel old. People want a better multitouch experience, access to better games and better browsing experience. I understand that what I do may skew my perspective but it’s very clear that the consumer technology people bring on a plane will be better than what’s built in and I’m seeing tablets on planes more than anywhere else. In some ways, the airline industry needs to follow some cues of the auto industry: car makers know that the product cycle of an automobile isn’t going to keep up with the consumer tech, so smart companies like Ford are leveraging existing mobile technology to provide a better experience.

The benefits for the consumers are clear: you get a cool tablet that is more than enough to help you kill time on the plane. The free WiFi could be key because this would also enable you to even get some light work done like checking your e-mail or going on social networks. People already bring things to do on a plane but if you don’t own a tablet and are stuck on a plane for a long time, $10 is a fair price to keep you occupied as well as give you a chance to check out those tablets that you’ve secretly been interested in.

For the airlines, tablets could represent a nice new revenue stream that also has the added benefit of making your airline seem cool and high tech. Buying new tablets, even thousands, would be cheaper than having to retrofit older planes with built-in televisions and you could even potentially sign deals with app makers to be preloaded on these devices – Who doesn’t like playing Angry Birds at 30,000 feet? Built-in advertising could also be in the future, as you would have one of the most captive audiences that’s out there. Obviously, the Virgin Americas of the world wouldn’t need to do but this could allow the other airlines to have that high-tech, cutting edge branding that Virgin seems to have locked up.

I’m not going to pretend to know how much it’s going to cost to equip all of these planes with WiFi or how many headaches updating, maintaining and tracking these tablets will cause. Additionally, I know that flight attendants are already stressed as it is, so throwing tablet rental and in-person tech support duties would probably drive some of them crazy. Even with those hurdles, I am convinced that this is going to happen and the only question is: which airline will be smart enough to embrace tablets first?

The latest study conducted by Nielsen shows that 40 percent of people use their tablets and smartphones while watching TV. This...