I ducked into Gameloft’s San Francisco office today to check out some new iOS games, including their upcoming first-person shooter, Modern Combat 3: Fallen Nation. As with many Gameloft titles, the influence of popular games is readily apparent – in this case Call of Duty – but they’re shy about mentioning the originals by name. Things like earning points towards the next rank with every kill, achievements on a per-round basis, perk-style skills, weapon-specific challenges, competitive online multiplayer, and unlockable guns with a variety of customization options are all familiar features to experienced gamers. What might be less familiar is getting that same gameplay on an iPhone or iPad.

I tried my hand at gyroscopic control for our multiplayer match, which was an abysal failure more for my lack of iOS gaming experience than the game itself. It was actually extremely responsive. After practice, I’m sure I would prefer motion-based control to the traditional dual-stick mode – mostly due to my roots in PC gaming and the precision a mouse offers. The auto-aim option certainly helped offset my wanton spazziness.

One thing that kind of blew me away about Modern Combat 3 was that all of the on-screen control UI elements were repositionable and resizeable to whatever makes the most sense for you. On-screen controls are tricky, as they can block out a fair bit of gameplay, but having some influence over that visibility is a huge bonus.

Although the spotlight is on the 12-man multiplayer, there’s also a single-player campaign. I only got through most of the first mission, and enjoyed the few interspersed cutscenes. While I haven’t poured any time into Gameloft’s previous Modern Combat titles, they tell me their proprietary engine is getting better every time. I’m dubious about Gameloft’s assertions that mobile gaming has the capacity to compete with traditional home gaming consoles, but the mid-mission cutscenes were crafted with an attention to detail that was very close to console quality, even if they didn’t have as high of a polygon count.

Modern Combat 3 hits the App Store on October 27. Pricing hasn’t been anounced, but considering the standard set by their other games, you can expect it in the $6 – $10 range. Here’s a video, and you can check out a bullet point features list after the jump. 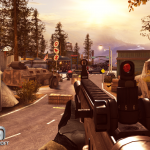 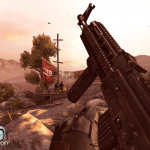 •       Use your customized weapons to battle your way to the top of the leaderboard.