The graphic heading created by Michael DeGusta at the Understatement.com, seems to be grabbing everyone’s attention around the Internet. The graphic (down below) illustrates Android’s serious problem with the way it updates its devices. This comes after the company recently announced that Nexus One users won’t be getting upgraded to Android 4.0 Ice Cream Sandwich.

The chart demonstrates the major problem with the Android ecosystem. The motivations of the carriers and manufacturers are obvious, which are short term gains and keeping customers by locking them into proprietary overlays. Discussing this matter further, DeGusta says on his site:

“It appears to be a widely held viewpoint3 that there’s no incentive for smartphone manufacturers to update the OS: because manufacturers don’t make any money after the hardware sale, they want you to buy another phone as soon as possible. If that’s really the case, the phone manufacturers are spectacularly dumb: ignoring the 2 year contract cycle & abandoning your users isn’t going to engender much loyalty when they do buy a new phone.”

What DeGusta also mentioned was how Apple basically goes about things the right way, mentioning how “Apple also really only makes money from hardware sales, and yet their long term update support is excellent (see chart).”

I know, most of you educated techies would probably say he’s only stating the obvious, but for him to put together such a valid argument followed by a graphic should come off a bit striking. If you’re an Android consumer it’s pretty hard for you to disagree, but the one potential bright spot in all of this is Ice Cream Sandwich. Google has a chance to basically start over by repairing its bad fragmented reputation with updates starting with ICS. 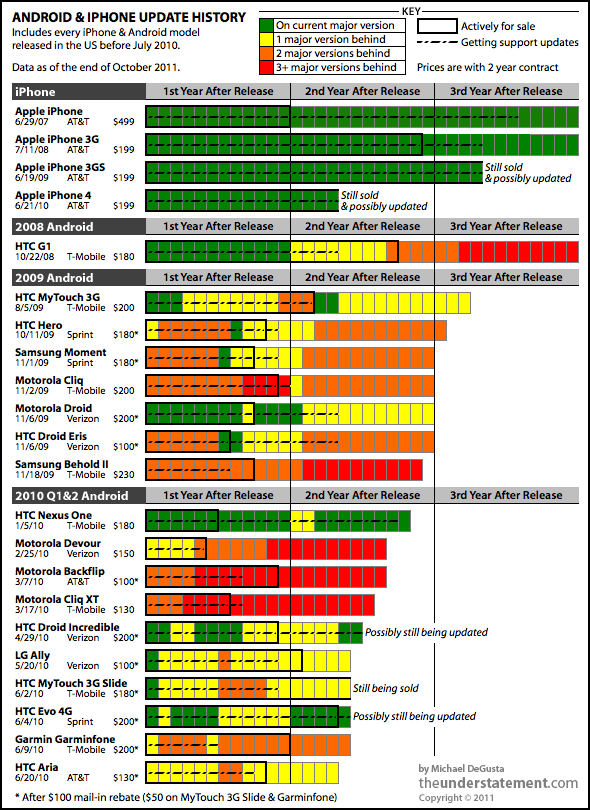 Some say that the iPhone changed how people interact with their mobile phones, and for the most part it's been...