We’re pretty big fans of the iPhone 4S as the revamped innards, boosted camera and Siri make it a worthy upgrade over last year’s model. But some of the IntoMobile team has been having some issues with the battery life and we wanted to know if you’re experiencing the same thing.

Yesterday, I pulled the iPhone 4S off of the charger at 8:30 a.m. and headed for some brunch (maple bacon = yum). I was then forced to go with the gal pal shopping for a few hours and I was your stereotypical dude at the mall sitting in the chairs playing on my phone. I was doing some light web browsing and playing some games like Tiny Wings but wasn’t using battery-taxing services like the location-based Find My Friends. Still, by the time I escaped the malls around 3:00 p.m. my Apple smartphone was around 15 percent battery life. 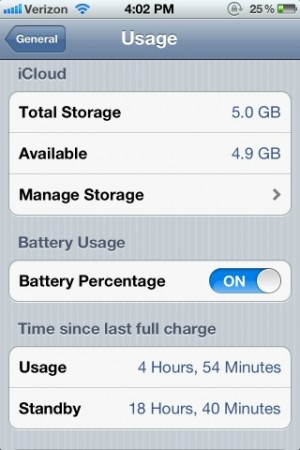 Maybe I’ve grown accustomed to the iPhone 4 but that type of battery life just isn’t acceptable. The new iOS 5 software may be the culprit, as it includes stronger notifications, more chances for location-based services to drain your battery and more.

Marc Flores points out that people shouldn’t be bitching, as Apple specifically said that the iPhone 4S would have a shorter standby time than the previous version. I mean, putting in a dual-core processor in the same form factor has to lead to some differences in battery life. With a little tweaking, Marc has had great battery life on his iPhone 4S too.

The mobile app game goes through trends and it appears like the hottest thing going now is photo-sharing apps. So,...