Whenever Apple comes up with an idea, they patent it. Whether or not they’ll use that idea in a future product is a totally different question, but let’s pretend for a minute and say that the Apple patents that have been published today will eventually come to fruition. First up, there’s the “swipe then hold” gesture. The name is pretty self explanatory, but what it does isn’t exactly obvious. Instead of using pinch to zoom to focus in on a friend of yours in a photo that you’ve taken, you simply “swipe then hold” and iOS will recognize that you’re trying to zoom. Doesn’t sound very accurate, does it? Next there’s the reverse gesture, called “hold then swipe”. Think of this like dragging and dropping on your computer. You click on an icon, hold the click, move your mouse to drag the contents within that icon somewhere on your system, then release the mouse button. Same thing here, except you’re obviously using your finger. And finally there’s screen tilting, which ironically Nokia demoed at Nokia World last month. You tilt the screen towards you to zoom in, away from you to zoom out, and either left or right to change what you’re looking at. 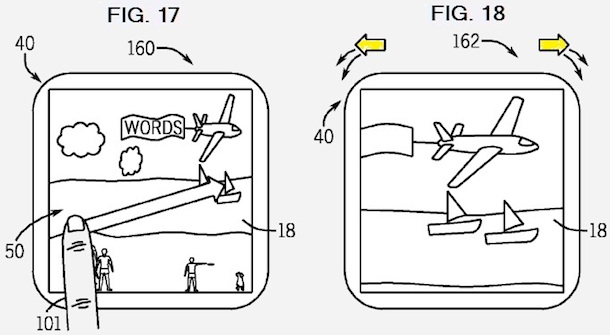 It’s difficult to judge gestures based on a few patent drawings, but the bigger question is how easily can people learn a new interaction method? Pinch to zoom is great, and every platform now has it, but what about multitasking? In iOS you double tap the home key. In Windows Phone you hit and hold the back key. In Android you hit and hold the home key, but in Ice Cream Sandwich there’s a dedicated key to show the applications running. In webOS … who gives a shit, it’s dead. Consumers shouldn’t have to crack open an instruction manual to use their device, but power users will probably have to in order to get the most out of their shiny new hardware.

Apple released the iPhone 4S unlocked and contract-free today in the United States as promised, but you'll have to dump...