Spotify has just sent out an invitation for an event simply dubbed “What’s next for Spotify?” that’s due to take place on November 30th in New York City. The CEO, Daniel Ek (pictured above, left), will be there, along with “special guests”. So what do these guys have up their sleeve? After launching their service to the European public in October 2008 they finally landed in America this past July, and have done quite well when it comes to supporting all the major phone platforms. The only device they don’t yet support is the iPad, but why would you organize a press event just to show off an iPad app? We’re thinking there’s got to be some big announcement here regarding business models. Right now to use Spotify on your mobile device you need to cough up $10 every month, which sounds like a lot, but frankly it isn’t since you have access to a catalog of roughly 15 million songs. 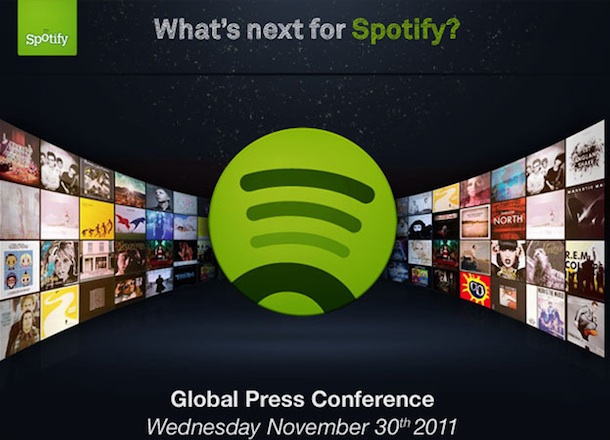 Cloud streaming services like iTunes Match, Google Music, and Amazon’s Music Store are cheaper, with the latter two being free. They offer users the ability to upload their existing tracks to a server farm so they no longer need to have a local copy, but there are limits. Apple’s iTunes Match is $25 per year and holds “only” 25,000 songs, Google Music is free and holds 20,000 songs, and Amazon’s service is also free, but only holds 5 GB worth of MP3s. With Spotify and similar services like Rdio and MOG, you don’t worry about counting songs or counting bits, you just play.

Could Spotify unveil a new web based player? That would solve the problem of not having an iPad app … but again, an entire event just for that? We’re biting our nails here! That being said, November 30th is just 8 days ago. Stay tuned for updates, we’ll be watching this story closely.