At this point, there no arguing about the dominance that is Android. Not too long ago, we wrote about ComScore’s survey, which showed 45 percent of all smartphones nationwide were Android operated. Well, the folks over at Nielsen have another study that shows the growth of both Google and Apple’s software ecosystem, particularly in the app downloads department.

According to recent Nielsen data, 44 percent of all U.S. mobile subscribers now have smartphones, with Android and iOS leading the pack. Android accounts for 42.8 percent of smartphones, iOS has 28.3 percent and, when combined, the two platforms grab 71 percent. When it comes to smartphone apps, new data shows iOS and Android together control an impressive 83 percent of app downloads in the U.S.

Apple has almost double the apps in its store compared to Android, but since it’s out numbered in the handsets department, it’s falling behind Android in app downloads. Now, this doesn’t mean Android has better apps than iOS, it just means there’s more people downloading apps from Google’s mobile OS. The study is a little vague; I wish they would have added more information on the type of apps people were downloading, so we can get an argument on quality versus quantity. In any case, it’s clear that everyone other than Google and Apple are having a hard time claiming app market share. 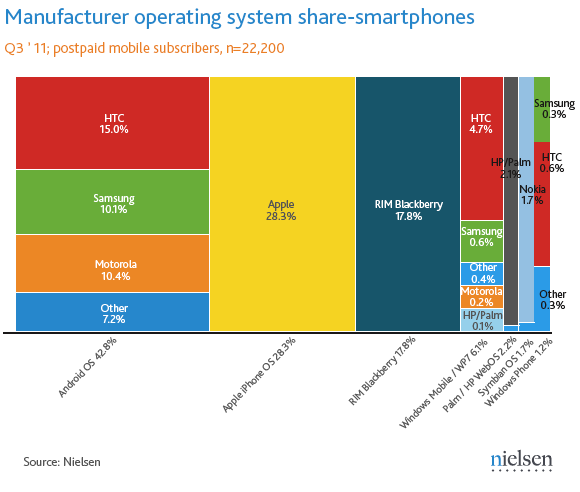 [via Nielsen, image via Shutterstock, iQoncept]

When Infinity Blade was released last year, I was very impressed by not only its breathtaking visuals, but also how...