comScore has just released some numbers relating to the U.S. wireless market in the three months leading up to October, and Samsung is still on top, claiming 25.5% of all mobile subscribers (among smartphones and otherwise). The numbers haven’t changed too much since their September survey, so there aren’t a lot of surprises.  LG was nexddt up, with 20.6%, followed by Motorola with 13.6%, and Apple with 10.8%. RIM’s handset market share predictably dropped -0.8%, while platform market share dropped 4.6%. Of course, the survey is only taking place in the U.S.; the BlackBerry brand seems to summon up a bit more excitement elsewhere in the world.

Android will soon claim a full half of the U.S. smartphone market, now that it’s sitting at 46.3%, which is up 4.4% since July. Microsoft’s mobile OS is still having trouble gaining traction at 5.4%, while iOS continues to hover around 28.1%.

Seeing as Samsung has landed two Nexus handsets in a row, it’s no surprise to see them doing so well, but with Motorola under Google’s wing, and pumping out some slick-looking hardware like the Droid RAZR, Samsung’s reign may not last. As far as platforms go, it will be awhile before we see RIM making anything resembling a comeback, but it would sure make thing interesting if they did. 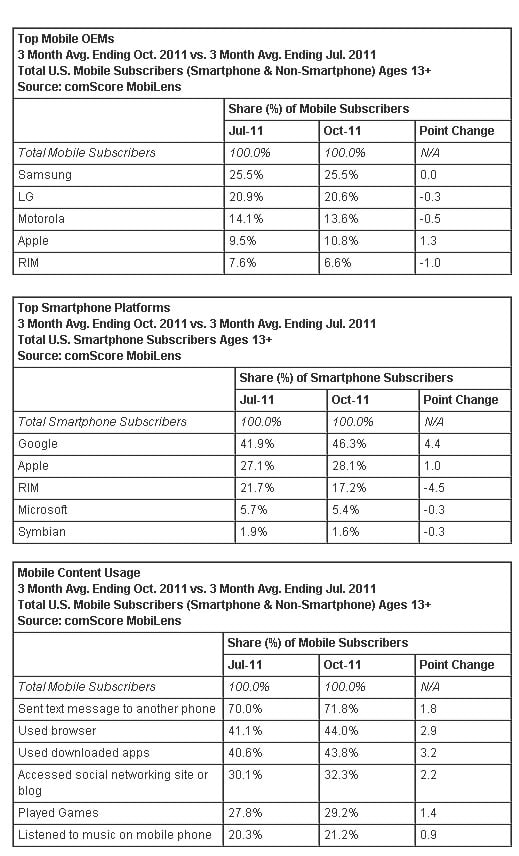 Androidland is a one-stop shop for Android phones in Australia

Telstra wants you to know more about Android and has created an interactive, in-store experience that's all about the green robot. The interactive store-within-a-store is called Androidland and is located in...