It’s been a month since the Kindle Fire launched and no one knows the exact sales figures (except for Amazon) but a new report from Millennial Media sheds some light on the success of the Amazon tablet.

Millennium, a company which bases its monthly data on mobile ads distributed across its multi-platform network, says that ad impressions on the Kindle Fire have been steadily growing since launch, at a rate of about 19 percent daily. I know, 19 percent doesn’t sound like a monster number, but if you factor in the hundreds of millions of ad impressions every month, then you’d have some serious cash-flow that can’t be ignored.

The ad network mentioned that the 7-inch tab’s ad impression growth has “slightly outpaced” the Apple iPad, when it first launched in 2010. This illustrates the advantage Amazon has of selling into a wider tablet market, with a slate that only costs $199. This news doesn’t surprise me because the giant online retailer hedged its bet smartly by targeting a lower price point to get the slates out of the door only make up for it on the back end with ads and service — something all manufacturers should take note of. 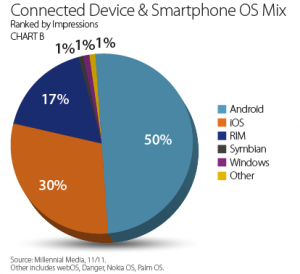