According to app tracking metrics from Distimo, the Android Market may have reached the 400,000 app milestone.  This is just one of several milestones recorded for the Market in the past twelve months. About 31 months after it opened for business, the Market reached the 200K mark in April 2011 and then climbed to the 300K mark four months later in August 2011.

The Android Market still has less apps than the iOS App Store, but it’s adding new apps at a faster rate than its competitor. The Market started off slower – taking 31 months versus iOS which took 22 months to reach the 200K mark. It’s at this point, however, that Android took off. The platform took four more months to reach 200K and another four to reach 300k. iOS reached those same milestones, too, but  it took eight months and seven months, respectively.

When comparing app stores, quantity is important, but so is quality. One of largest complaints against the Android Market is the supposed low quality of the apps. Everyone lauds iOS for its excellent apps and blasts Android for its garbage apps. Some of this bias may be the result of people’s perception of free apps, which dominate (68%) the Android Market. Some of it may be the way Android handles graphics, which is supposedly less efficient than iOS.

I’ve noticed a difference between iOS and Android, especially in apps like Evernote which has an app on both platforms. As much as I enjoy Android, I prefer the apps on iOS better. But I am only one person with one opinion, what about you? Do you have a preference? 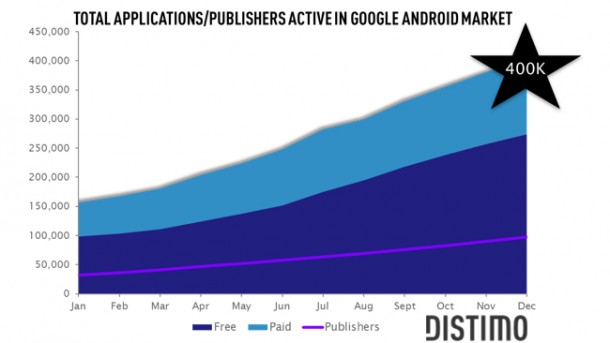 Google calls up IBM yet again to buy some patents, picks up 217 more

Back in July of last year Google bought over 1,000 patents from IBM. Just a few short months later, in...