Samsung didn’t cause much of a stir in mobile this CES, as we only saw a few repackaged devices we’ve already seen before. While that’s all fine and dandy, many are already expecting what Samsung has been working on over the past year and just when we will be seeing the Galaxy S III. While we know there’s a good chance we’ll see the new handset sometime at Mobile World Congress, some think they the company let its new flagship device slip out in a video during its press event in Vegas last week.

Personally, I don’t think there’s much truth to this. The actual screen was faked, as I’m not sure of a camera software that still shows your battery status during a shot. Either way, the likelihood of Samsung slipping up with its flagship handset sounds rather ridiculous, as most Galaxy S phones share the same design aesthetic in some facet. The picture shown does depict a handset that looks to have a large display but there’s little else to determine what it could be. 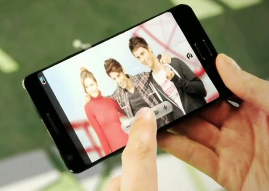 From what we’ve gathered, the Samsung Galaxy S III will sport the same size and resolution display as the Galaxy Nexus (4.65 inch HD Super AMOLED), 1.8GHz dual-core Exynos 4212 CPU, and 12 megapixel camera. But that’s to saw that the leaked internal slides we saw back in October is valid. We wouldn’t be surprised if Samsung introduced some sort of new display tech, which could make the Super AMOLED Plus HD display a reality. Or not. Of course, a lot of the specs don’t line up perfectly at the moment, so only time will tell.

With just about a month until Mobile World Congress kicks off, we’re sure we will see plenty more from Samsung in the mobile space. With the Galaxy S III a given, we could also see some more tablets coming from Samsung. We’ll just have to wait and see.

Woz disses iPhone limitations, wishes it was like Android

You'll often hear from people that the iPhone is just better than Android because it's more polished, beautiful and the...