Sony Ericsson has just posted their Q4 2011 financial results and boy they’re not pretty. The company managed to lose 207 million Euros during the last three months of 2011, which translates to roughly $266 million. They shipped 9 million mobile phones, down 20% from the same quarter last year, and down 5% from Q3 2011. How the hell do you sell fewer devices during the holiday quarter? Anyway, while Sony Ericsson doesn’t specifically mention how many smartphones they sold, we do have two important data points. In their Q3 2011 financial results Sony Ericsson says 22 million Xperia smartphones have shipped to date. Their latest financial results say they’ve shipped 28 Xperia million smartphones to date. Do some simple math and you get 6 million Xperia smartphones, which is pretty pathetic considering that during the same quarter it’s estimated that Samsung shipped 35 million smartphones. Apple is estimated to have shipped roughly the same amount as well. We’ll find out how many smartphones Nokia shipped when they post their Q4 2011 results next Thursday. 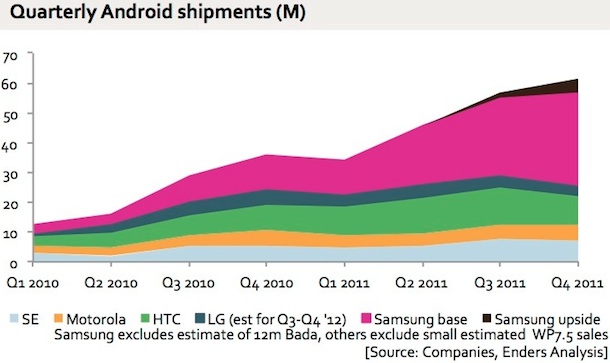 This begs the question, has Android growth stalled? Well, yes and no. Benedict Evans, an independent analyst who we’re big fans of, recently tweeted the chart that you see above. See all that pink? That’s Samsung blowing up. See everyone under Samsung? Those are companies that depend on Android to sell their devices. So no, you can’t say Android growth has stalled since Samsung can’t make Android devices fast enough to feed demand. But at the same time you can say that yes, Android growth has pretty much stopped because the rest of the players in the Android ecosystem can’t seem to get their act together.

We’ll be able to draw some more concrete conclusions about the market once everyone posts their numbers, but we’re predicting to see a general slowdown in smartphone adoption. Americans may be picking up smartphones in droves, but it’s a different story in Europe and Asia. Blame the economy more than anything else for that.

Sprint to remove Carrier IQ software from its phones

Sprint is no longer using the Carrier IQ software and has decided to remove it from its handsets. Earlier this...