Arguably one of the best features of Google’s Android mobile operating system is the ability to swipe down from the top of the screen and see a list of notifications that require your attention. Missed calls, missed texts, someone liking your latest Facebook status update, that sort of thing. It’s such a handy little gesture that both Apple and Nokia copied it, in iOS 5 and Symbian Belle respectively. But what if companies could start using the notification bar for something other than notifications, like ads? That’s exactly what KDDI, an operator in Japan, is doing to their Android customers. Now yes, you can turn this “feature” off, but we’re livid that this was done in an opt-out versus opt-in format. If customers want to get ads in exchange for say a cheaper phone bill, then fine, let them sign up for ads, but delivering ads to unsuspecting customers just to improve the bottom line? That’s sinister. 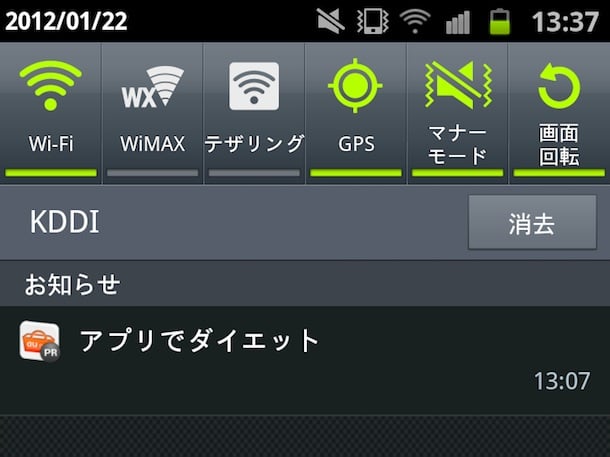 What worries us is that a similar service exists in the U.S. called Airpush. What if AT&T, Sprint, T-Mobile, and Verizon started installing Airpush on all their Android devices and forced customers to deal with bullshit alerts for product offers that no one is interested in? The consumer backlash would be deafening. That being said, that scenario we mentioned earlier, about customers opting in to receive ads in exchange for a cheaper phone bill, why hasn’t that caught on? Several years ago there was a disruptive new operator launched in the UK called Blyk. They gave people 43 minutes and 217 free texts a month if they agreed to receive ads via SMS. The service was eventually shut down, but with today’s modern smartphones why not increase the amount of free minutes and texts you give customers and then let advertisers go wild with multimedia ads? Such a service may not be something you’d be interested in, but what about people in lower income brackets?

Tired of those Samsung versus Apple ads the Korean company is pumping out at an amazing rate? Hope not, because...