Samsung may have spilled the beans on an unannounced tablet that could be showing up at Mobile World Congress. On the company’s invitation to a Samsung Developer event, it lists known devices like the Galaxy Note and Wave 3 but it also lists a mysterious “Galaxy Note 10.1.”

The bigger version of the Note is supposed to exclude the use of 3G/4G radio to aim more attention to the S-Pen, as it will be the center of attraction at a dev event focused on software development. With this leak the Korean-based manufacturer looks to be gearing up to use Mobile World Congress as the coming out party for this larger stylus-capable device. Reading the Developer Day clip note, suggest this wasn’t a simple typo, but an unofficial announcement to something new. 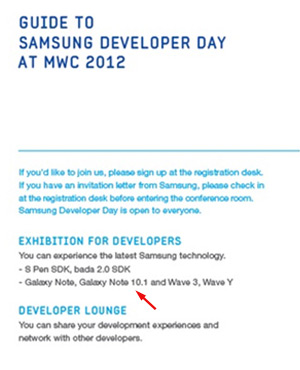 If you’re still not convinced, then wait there’s more. The Galaxy Note 10.1 made another appearance on a site called BackStage (a casting call website for acting jobs), as the company is looking for a young teenage guy to show how its 10-inch G-Note performs in functional task like record, take pictures, edit and conduct other such activities that fall in the education, financial planning, and art categories (clip of the ad, below).

If Samsung is indeed working on bringing a 10-inch stylus device to the market, it would conflict with its marketing message. It just doesn’t make sense. Why would they push a larger Galaxy Note? The original message for the Note appealed to consumers because it couldn’t be categorized — it’s not a phone nor tablet — it’s a unique gadget with phone capabilities. That’s why we’re hearing that the “Note 10.1” name may just be a placeholder and that this could be the next-generation Tab product.

We’ve heard rumbling before that it could reveal a Tab product with a super high resolution screen at MWC and Samsung has previously said that the S Pen could make its way into other devices. This could also give Samsung a jump on Apple in the tablet space, as it could claim to have the “Retina Display” quality screen before Apple does. Apple will likely unveil an iPad 3 with a Retina Display a week after MWC, though.

Even if Samsung isn’t holding a press conference at MWC, it may still have some cool new products. We can’t wait to see if this thing actually appears at MWC this year.

If you’re curious as to how the S Pen works, check out this video about the stylus with the Galaxy Note.

Where’s PlayBook OS 2.0? Look for it to come at MWC

Research In Motion promised that its PlayBook would get the really-nice 2.0 software in February and I'm sure many of...