Regardless if you’re big into gaming or not, I’m sure you know either first-hand or by someone you know that today is when Mass Effect will be on the minds and lips of many gamers worldwide. That’s because the final chapter in the Mass Effect saga, Mass Effect 3, has hit retailers and is probably going to stay in Xbox 360, PS3, and PC disc trays for months as gamers attempt to fight for Earth.

Mass Effect is bigger than most people realize as it encompasses a number of comic books, novels, and even a movie. Mass Effect: Infiltrator is a game set in the Mass Effect world adjacent to Mass Effect 3 whose purpose is to not only scratch players’ Mass Effect itch while on-the-go, but also as a way to help with the final outcome of Mass Effect 3 in a genius attempt at cross-platform synchronization.

If you’re familiar with EA’s Dead Space mobile game, then you already know what to expect from developer IronMonkey Studios. Mass Effect: Infiltrator is a third-person shooter that has you taking the role of Randall Ezno as he fights against Cerberus across multiple locations. Randall is able to acquire new weapons, biotics, and other improvements through in-game credits that can be acquired through a number of ways like searching safes, computers, or at the end of each battle. 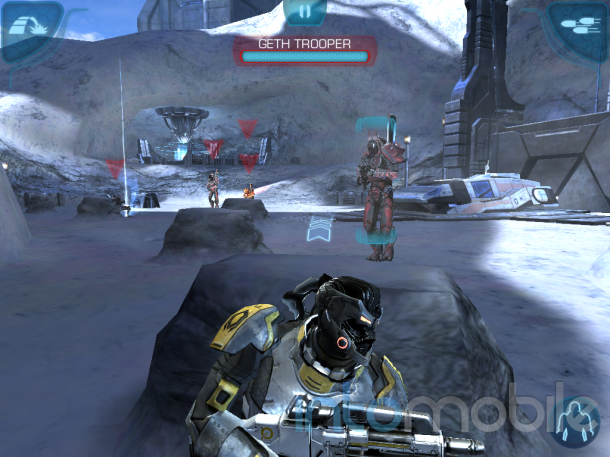 One thing you’ll be doing a lot of in Mass Effect: Infiltrator is fighting. It helps that the combat system in the game is really fun and rewards players for attacking enemies with different methods, taking as little damage as possible, and finishing your fight within a certain amount of time. You’ll receive a rank at the end of each fight as well as stars in one of each category: style, time, and health. The higher your rank, the more credits you’ll earn.

When combat is initiated, Randall can take cover and move from cover to cover with a simple swipe of the screen. Enemies that are within attack range will have a blue rectangle around their body which you can tap to begin your attack. As you attack, you can tweak your aim by manipulating the right side of the screen. Once an enemy is defeated, you’ll have the opportunity to chain your attacks with another enemy by focusing on them and tapping on them if they’re within range. Once you unlock more weapons and biotics, you can chain an impressive amount of attacks with little effort and a lot of imagination. 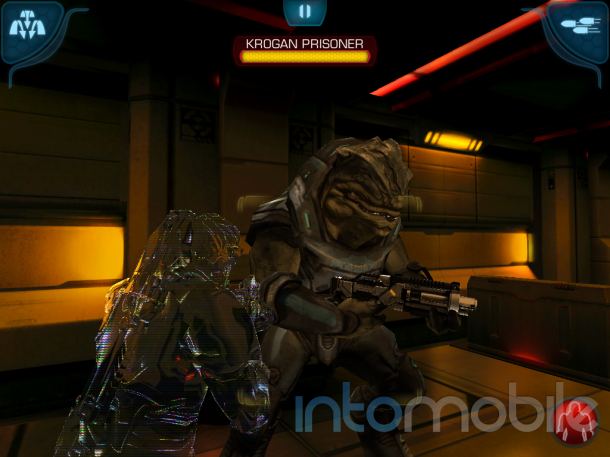 Mass Effect: Infiltrator looks amazing on both the iPad 2 and iPhone 4S. Each location has its own look and feel to it that distinguishes itself from the rest and Randall looks like a complete badass, especially when he receives upgraded armor and helmets. I was surprised to see many of the enemies I’ve encountered in Mass Effect have been included in Mass Effect: Infiltrator and will combat Randall as they would in a real Mass Effect game. Krogans will wield shotguns and charge at you, Geth will use little strategy against you, and Turians will attack from afar with sniper rifles.

Intel plays a vital role in both Mass Effect: Infiltrator and Mass Effect 3. As you defeat your enemies, you’ll run into intel that’s been dropped and can be used in one of two ways: upload it to the Galaxy at War servers to assist the Alliance in their fight to free Earth, or for credits that can be used in Mass Effect: Infiltrator. Each piece of intel will get you 50 credits if you decide to cash it in, which later on in the game doesn’t amount to much. I personally chose to upload every piece of intel I received in Infiltrator in order to help my chances of surviving the final battle in Mass Effect 3, but hey, that was my own decision as I’d much rather help the outcome of the ending of Mass Effect 3 than be able to buy a new ability in Infiltrator. 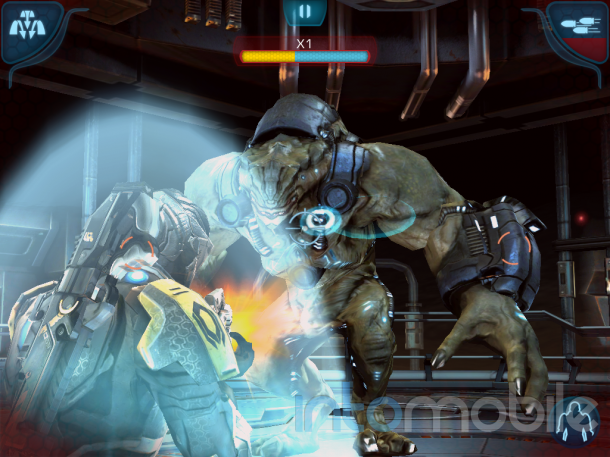 FINAL THOUGHT: I’ve never experienced a game that does such a great job at class-platform synchronization as Mass Effect: Infiltrator. Each time I defeated an enemy that dropped a piece of intel, I was genuinely excited as I knew it would be helping in the final outcome of Mass Effect 3. When you factor in Mass Effect: Infiltrator does an amazing job at offering a unique yet familiar Mass Effect experience, as well as delivering an exciting and fresh perspective on the third-person shooter genre, then you’ll see exactly why I’d give Mass Effect a gold star, editor’s choice, 10 out of 10, or whatever kids are giving games these days that they really, really like.