We’re just a few hours away from the unveiling of the next iPad and it’s clear that Apple will reassert its dominance in the tablet market with this new device. While we expect the iPad HD/iPad 3 to have some incredible new features, this may be the year that Apple finally finds some real competition in the form of Windows 8.

The iPad was supposed to get some real competition last year too but almost all of the challengers fell by the wayside. The Motorola Xoom and Android Honeycomb felt rushed and a bit half-baked and even the Ice Cream Sandwich update doesn’t appear to be galvanizing the Android tablet app ecosystem as much as consumers would want.

Android still has a shot in the tablet market, which is more than you can say about the other pretenders to the throne. Research In Motion’s BlackBerry Playbook seemed like an “iPad killer” when it was first introduced but it was released too late and didn’t get all the features it needed until the just recently. HP was also thought to be a contender in the tablet market with webOS and the TouchPad but it showed absolutely no faith in webOS, killed the TouchPad before it had a chance and eventually turned the platform open source. 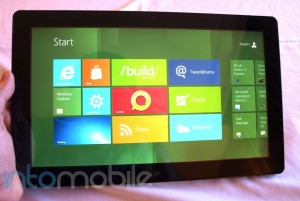 Apple pushed forward and, just like Steve Jobs predicted, 2011 was all about the iPad 2. We’re not just talking about dominating the tablet market, as Apple sold more iPads in the fourth quarter than HP sold computers. That whole “post-PC era” seemed closer than ever.

That’s why Windows 8 is so important for Microsoft and why it’s a radical “re-imagining” of the platform with tablets and touch in mind. The Consumer Preview was just released and while it’s geared toward desktops, you can see how big of an influence the iPad had. The Metro-style interface has been built from the ground up with a tablet interface at the forefront, as it’s fast, fluid and the large icons are perfect for tapping with your fingers.

If Microsoft just wanted a touch-friendly platform for tablets, it could have just used Windows Phone Mango on a these larger screens but the company promising that Windows 8 will deliver a “no-compromise experience.” That means you’ll be able to use your Windows 8 tablet on the go like an iPad but if you have to do some hardcore work, you can dock it on your desk and then get some real work done with a connected keyboard and mouse. Throw in the neat SkyDrive integration which brings your apps and settings to whatever device you’re using, a developer ecosystem which is well-known, and you have the makings of something special.

Windows 8 will also support ARM chips and this will enable manufacturers to create iPad competitors which arguably have a more powerful operating system but with a gorgeous user interface. This will also open the doors for new manufacturers to play in the tablet space, as we expect HTC and Nokia to eventually have tablets running Windows 8. Microsoft and its partners also have the resources and resolve to make a major push against the iPad. Because of these reasons – and a host of others – I do believe that Windows 8 devices will be the biggest threat the iPad has seen.

I just don’t know if it will be enough. 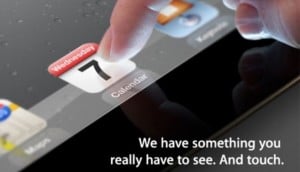 The next iPad (iPad HD?) will likely have a Retina Display, boosted camera, better internals and generally be one of the most powerful devices out there but what really sets it apart is its robust ecosystem. By this, I’m not just talking about the thousands of developers creating custom iPad apps – this is a major part, though – I’m also talking about all the other little things which can only be found around iPad products. If you want an amazing case for your tablet, chances are it will be for your iPad. This can also be said for accessories and specialty software.

While Windows 8 is meant to be tablet-first, the support for ARM won’t be without its own limitations. As Microsoft has detailed, the legacy apps probably aren’t going to work on ARM devices and it’s unclear if Intel-based tablets are going to be able to deliver the form factor and experience that users want. We used a developer preview version of Windows 8 on a Samsung Intel tablet and it had a fan … that’s a non-starter. If you cut out the advantage Windows had with its legacy apps, then Apple’s iPad is actually quite far ahead when it comes to tablet-ready programs. Additionally, god help the Best Buy clerk who has to explain to customers the difference between an ARM tablet with Windows 8 and an X86-based one.

Of course, enterprises would flock to the Windows tablets, right? I’m not so sure about that one because while you’ll be able to manage ARM-based Windows 8 tablets, these won’t be able to operate as full desktop machines on the network. You’ll still be able securely manage these devices but the iPad is already gaining traction with businesses and I’m not sure I see a truly compelling reason to switch.

Another reason many of the iPad competitors haven’t been able to compete against Apple’s tablet is pricing, as we’re still seeing beautiful devices like the Galaxy Tab 7.7 come out with price tags that are anchors. This isn’t greed or stupidity, as these things just cost a lot to make and unless you’re willing to take a loss on each unit like Amazon does with its Kindle Fire, it’s tough to get a state-of-the-art tablet out at a palatable price.

Windows 8 won’t be able to solve this issue because of the licensing fee that Microsoft will charge. Apple’s supply chain mastery ensures that it can deliver its tablet for a somewhat acceptable $499 entry-level pricing and I wouldn’t be surprised to see it discount its iPad 2 devices to the $300 range. Oh yeah, it will still make insane margins off all of these.

For all the talks about iPad killers, the truth is that the iPad and Windows 8 can (and likely will) coexist with both Apple and Microsoft making tons of cash. I think the days of a single company holding a dominating percentage of the computing market are over. Still, Apple is so far ahead of the competition in the tablet space that it’s going to take a lot to knock it off the throne.

Halfbrick's Jetpack Joyride certainly impressed me when it was released last August, surpassing 13 million downloads after going completely free in...