The One line is easily the most important family of devices HTC has ever cooked up and the highly anticipated phones have been announced to grace the world with their presence starting on the 2nd of April. On top of that, a new rumor suggests that we may end up seeing the T-Mobile One S on the 22nd of April.

While some carriers and retailers have already announced the device for the 5th of April, it may have bee pushed up a few days. Starting next Monday, the HTC One line, which included the One X, One S, and One V will become available in Germany, Austria, and Switzerland.  That said, it could end up being up to the carriers and retailers as to when they will be selling the device, so the 5th of April may stick.

As usual, the hottest Android phones usually don’t land in the US of A at the same time as Europe, but we do know that both AT&T and Sprint will be getting the One X and that T-Mobile will be carrying the One S at some point in the near future, but until an official release date is set for any of these devices, all we have to go on is rumors. Luckily, we have one for the T-Mobile One S. 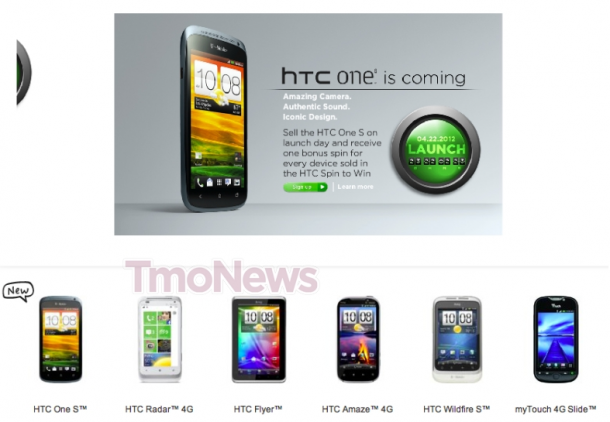 It was only  a couple of days ago that we got to see the software on the upcoming HTC One S for T-Mobile, and now we may actually have a date for the much-anticipated phone’s release. According to the leaked slide you see above, the One S may be hitting Magenta shelves on the 22nd of April. Just the simple fact that users only have to wait weeks and not months for the One S is pretty good news, even if it is a rumor. Still, since it is a rumor, we wouldn’t suggest waiting at the doors at a T-Mobile store until a solid date is set, obviously.

The One S is a powerful handset with sleek design but it just doesn’t compare if you’re looking forward to its bigger brother, the One X. With the expected announcement for Sprint’s variant taking place on the 4th of April, we could imagine that the handset could start shipping in early May if we’re lucky. As far as the AT&T One X is concerned, we don’t have anything solid as of yet.

If you’re patiently awaiting one of the HTC One devices, the release date is inching closer and closer. We do hope that the devices will land in the US sooner rather than later, as the one Android handset that could steal HTC’s thunder, the Samsung Galaxy S III, is expected to be announced sometime in May, if not earlier.

Grab a Refurbished Kindle Fire for $139 today only

Amazon has a stock of refurbished Kindle Fires up for grabs on their site. The 7" e-Reader/tablet hybrid is the...