Android Ice Cream Sandwich has been out for more than four months now but it’s still only on 2.9 percent of Android devices out there, according to stats from Google.

Android 4.0 adds a lot of features but it also changes a lot of the user interface elements, which can make it difficult for handset makers to bring it out on their devices at a super speedy pace. Sony recently detailed how difficult it is to update devices and that ICS does have more technical needs than previous versions.

The vast majority of Android users are on Android Gingerbread, as 63.7 percent are using this version. It has steadily grown in market share even after Android Ice Cream Sandwich was released.

There are still 23.1 percent of users still on Froyo and sadly, 6 percent are still on Eclair. When developers talk about fragmentation, this chart below is what they mean: 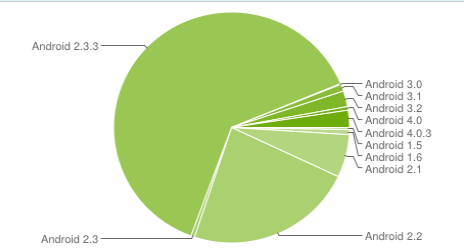 Photo filter and sharing-service Instagram, which has amassed over 30 million iOS users to date, has officially released the Android...