Research In Motion is holding its big BlackBerry World conference in Orlando and it just finished the keynote speech. The biggest news is that we finally got a glimpse at its next-generation BlackBerry 10 platform and it looked pretty impressive.

CEO Thorsten Heins delivered his first keynote as the leader of RIM and it wasn’t an easy job. RIM has been steadily losing market share in the major markets (emerging markets have grown though) and the general perception is that the BlackBerry maker is on its way down.

Heins delivered a solid, if not very exciting presentation but you could really see him light up when the company showed off the BlackBerry 10 platform. He said it’s not just another mobile platform, as this is a new, revolutionary mobile computing platform. RIM is giving all the developer attendees a developer alpha device that will run the software. 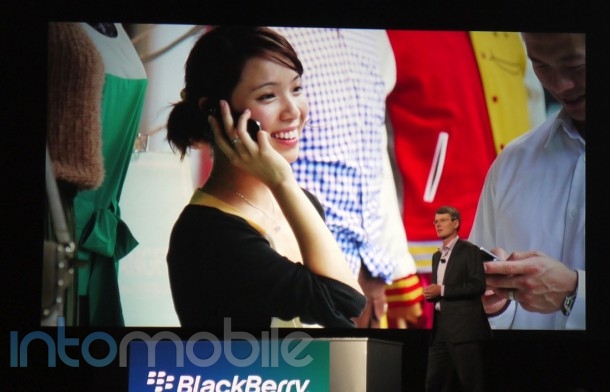 “We made the hard choice and took the hard road by delivering our own platform … We’re taking our time to make sure we get this right,” Heins said about BlackBerry 10.

The platform itself looked amazing … during a demo. It was designed around the design philosophy of “agile and nimble,” in that RIM wanted BlackBerry users to be able to compute as efficiently as possible while still having a beautiful user interface. It’s built around a flow of information where every app runs in the background and you can seamless traverse through them with a few taps or swipes. Check out the notification screen below. 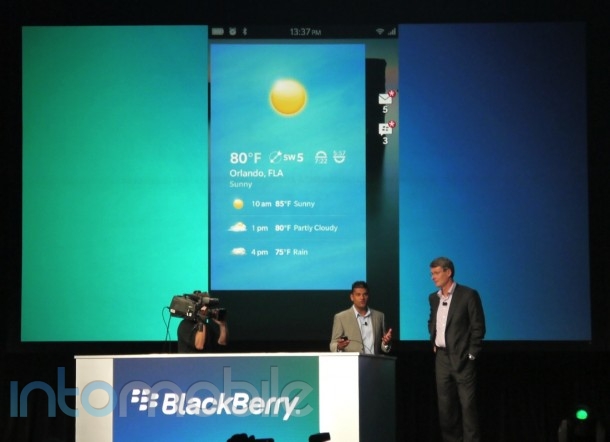 Of course, it wouldn’t be a BlackBerry without focusing on the keyboard and RIM looks like it did a good job on this. The big, large virtual keyboard supposedly uses algorithms to help personalize and improve your typing. For instance, it will recognize where you tend to hit the buttons and adjust accordingly. For the one-handed typists, RIM showed off a neat auto-complete feature that could be accomplished with an easy swipe. 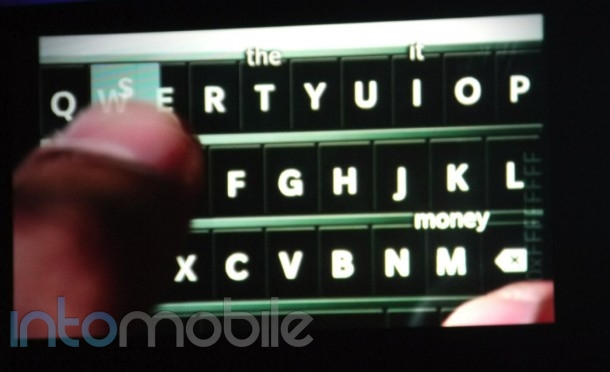 RIM then showed off some neat camera software in BlackBerry 10, as it appears like the device will record a few frames while you take the shot and you can then go back and choose which moment you want for the photo. I’m not 100 percent sure of this but the demo made it seem like you can adjust individual faces in a picture for this and it will quickly stitch that photo together. We’ve seen some great smartphone software recently, so I’m anxious to see how the BlackBerry 10 camera experience really stacks up in real-life situations. 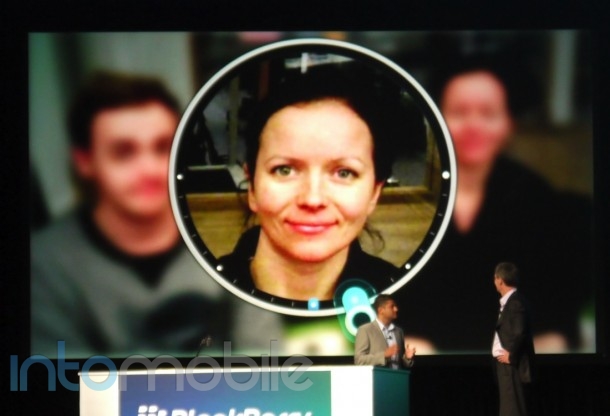 The keynote also consisted of some app developers showing off their wares and RIM had to also focus on its enterprise infrastructure side but it’s clear that the company’s fate rests on the success of BlackBerry 10. The demos elicited cheers and really did look fluid and innovative but doing that on stage is one thing, delivering it to consumers and businesses at scale is another.

I should be getting one of the BlackBerry 10 Dev Alpha devices soon and I can’t wait to kick the tires on this thing.