Every two weeks Google updates a website that shows which versions of Android have been accessing Play, the company’s store for apps, movies, music, and other digital content. The latest figures show that the newest version of Android, which as of today is 4.0.4, is currently running on just 4.4% of the devices that use Google’s mobile OS. Add in version 4.0 to version 4.0.2 and that number rises to 4.9%, which is pathetic considering the fact that 5.5% of Android devices are still running version 2.1, codename Eclair. For those who don’t remember when Eclair was released, it was almost 28 months ago. Now there are two schools of thought when it comes to Android fragmentation. Some people say that it doesn’t matter, that people buy devices, use them for two years, and couldn’t really care less if they have the latest and greatest features. Others say that handset makers should release software updates for at least a year after a device first hits the market. 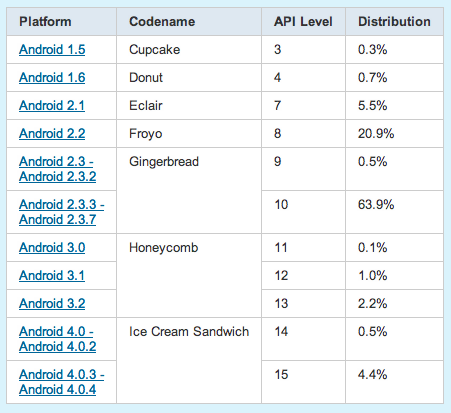 Who is right and who is wrong? It’s all about perspective. You can show three prospective home buyers the same property and one will think it’s too small, another will think it’s too big, and another will think it’s perfect. Gadget nerds want the most up to date software on their device because they like to play with new things; and downloading a free update is a lot easier than buying a new phone. For developers though, they like consistency, because it means they can spend more time writing a new application instead of testing their application on multiple handsets to see if it’ll even run. There’s a reason why iOS apps, for the most part, look and feel better than their Android counterparts.

What’s troubling is that we’re half a year away from November, which is when we’re expecting to see a new Nexus device. Said device will likely run the next version of Android.

Are you ready for even more fragmentation?