The FCC is getting serious about providing high-speed mobile broadband connections to rural areas. The agency has begun accepting bids to bring 3G and 4G services to parts of the country that have been ignored by major carriers, and is offering as much as $300 million to assist in the development costs of these networks. To provide a picture of the types of areas that would be impacted by such a move, the FCC has released a Phase 1 eligibility map that shows locations currently in the dark, which you can see quite figuratively from the eligibility map below. 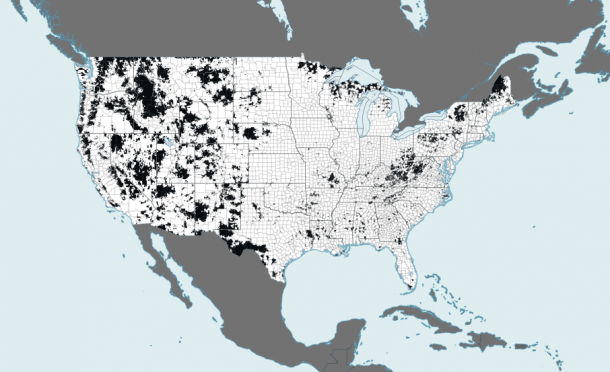 As you can see from the map, all locations you’d expect to see are included, from parts of Idaho, Washington, and Montana to a whole crapton of Alaska, to the parts of Maine that everyone thinks is secretly part of Canada. Locations highlighted in black on the map will be up for grabs for carriers looking to provide coverage to new locations at a heavily subsidized cost. Winning bidders in each territory will be required to bring 3G data within 2 years, or 4G data speeds within 3. Hopefully these carriers will opt for the latter option, as LTE (or WiMax, for that matter) would be a vast improvement over the current satellite connections most of these users experience.

Carriers will compete in a reverse-auction to win a share of the $300 million price, with the funding going to the provider who can bring 3G and 4G service to the area for the cheapest possible rate. Bidders will be competing both with carriers seeking to enter the same area, as well as those in other areas since they’re fighting for a share of a fixed pool. The short-form applications will be open from June 27th through July 11th, and winning bidders must provide coverage to at least 75% of the road miles in each census tract they win.

FCC will offer an additional $50 million in one-time reimbursement for coverage on tribal lands, and a $500 million per year for ongoing support of mobile services. We should learn more about the FCC’s Phase I winners in early July. For now, take solace in knowing that your rural friends and family will soon have cellular coverage that matches what we’ve had for a few years now.

[via ComputerWorld; Image from Discovery]

Online payments specialist BOKU has scored a deal with Sprint, allowing users to charge online purchases to their Sprint wireless...