SIM cards used to be the size of credit cards, but then they shrunk down to a much more manageable size called the miniSIM. It’s so ubiquitous these days that everyone forgoes the mini prefix and just calls it “the SIM card”. Apple, looking to maximize the amount of stuff they could put inside a phone with a 3.5 inch screen, was the first company to use an even smaller standard called the microSIM. They didn’t invent the microSIM standard, but they were crazy enough to start using it in a world that was dominated by miniSIM cards. Now there’s an even smaller standard called the nanoSIM. Proposals from Apple and Nokia have been given to the European Telecommunications Standards Institute, and it looks like Apple’s proposal will be chosen as the standard that everyone will use. 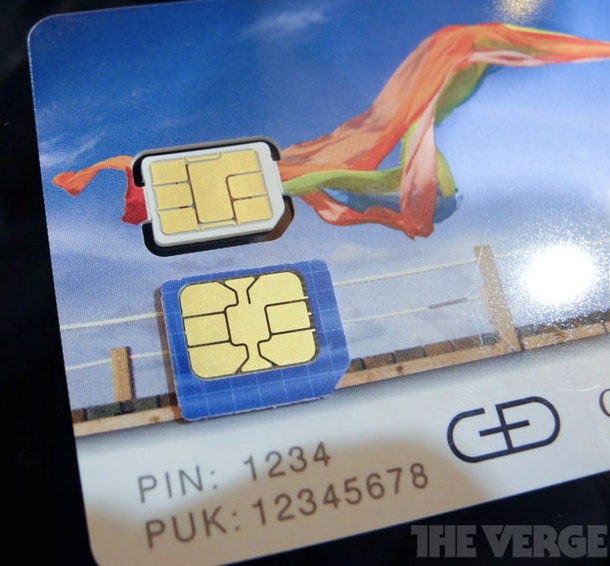 Giesecke & Devrient (G&D), the world’s leading SIM card maker, is down in New Orleans for CTIA, and according to The Verge, G&D says that the nanoSIM standard should become official at some point during this month. They go to say that: “We’ll see a product very soon after ratification.” Does that mean the next iPhone? Probably not, but whereas the microSIM took half a decade after it became a standard to be put into real world use, we expect the nanoSIM to be in at least one 2013 smartphone.

So why should we go even smaller anyway? Like we said earlier, there’s only so much room inside a mobile phone. You need to put a motherboard in there, several antennas, and most importantly a battery. If handset vendors could squeeze an extra 200 mAh inside a device because it uses a smaller SIM card, don’t you think they’d want to do that in order to provide a better experience for their customers?

Expect to hear more about this over the next few weeks.

We just spent some time with the Samsung Galaxy S III here at CTIA in New Orleans and wanted to...