It looks like people are starting to hold back from purchasing the latest phone to hit the market. Gartner today dropped some figures that detail the worldwide sales of mobile phones were down by 2 percent this quarter. This is the first time the market has declined since the second quarter of 2009.

The way Gartner breaks down most of its findings is from calculating the slowing demand in Asia-Pacific region, due to a lack of compelling new devices during the quarter in review. Folks are simply being patient, keeping their money in their pockets in anticipation for the next best handset.

When it comes to sales, Samsung is gaining ground, capturing 20.7 percent of all mobile sales worldwide, and it’s the top dog Android vendor with 10 percent market share. Wait, that’s not it for Sammy, the Korean based manufacturer also passed Nokia for first place in mobile sales with 20.7 percent.

In the end, we’re living in an Apple and Samsung world when it pertains to two venders cleaning up in the top 10 mobile rankings to have gained market share, while everyone else dipped (pictured in the list below). According to Gartner, smartphone sales accounted for just over one-quarter of all mobile sales: they stood at 144.4 million units, out of total mobile sales of 428 million units.

That said, it’ll be interesting to see if Samsung’s latest flagship device, the Galaxy S III will make any more separation before the next iPhone is launched. 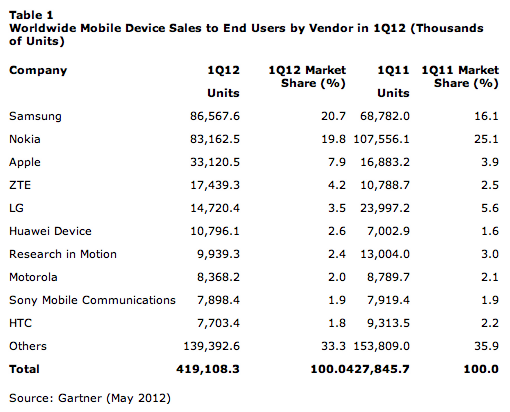 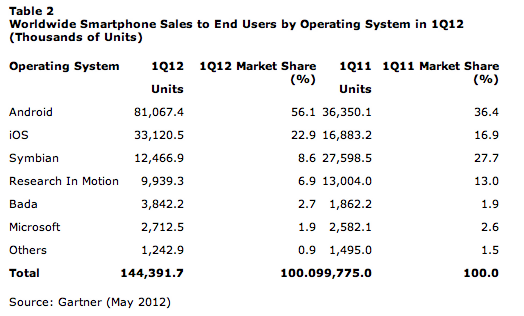