Yesterday I wrote up a post calling out Eric Schmidt for inaccurately predicting that six months from December 6, 2011, Android development would surpass iOS development. I used a few examples off the top of my head over the past six months of apps that did end up expanding to Android after gaining success on iOS, but argued that iOS is still the favorable platform for developers. Now, thanks to Flurry Analytics, we have proof.

According to its report, developers are building apps for iOS over Android at a ratio of 2:1. As of Q1 2012, 69 percent of app projects were started on iOS versus the 31 percent started on Android. This is a slight boost for Android over the previous quarter when it only garnered 27 percent of the share. On the other hand, compared to the year-ago quarter, Q1 2011, new app project starts on Android have actually dropped 6 percent. 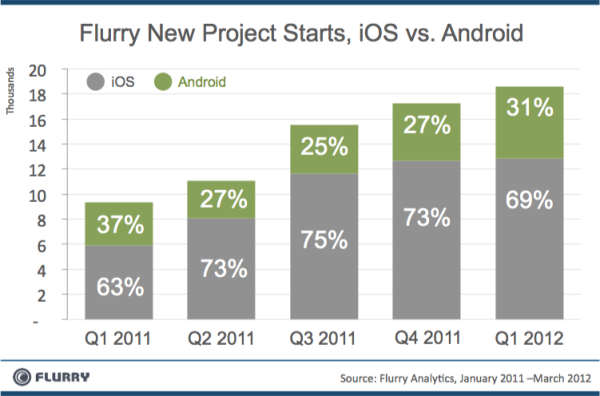 Keeping up with all the different devices and versions of Android out there powering them is proving to be a pain in the ass, too. The Samsung Galaxy S II holds 18 percent of user sessions with Android devices, followed by the Galaxy Ace with 9 percent. The percentage for each device in use just keeps getting smaller from there and there are hundreds of them. Then there’s also the matter of the operating systems. Gingerbread rules the market with a 70 percent share, Froyo has 16 percent and the latest version of Android — Ice Cream Sandwich — only has 7 percent. Fragmentation is making the platform a total mess.

Flurry is tapping in to its analytics for more than 70,000 companies, 185,000 apps and 100 million unique devices, so the statistics can’t get much more accurate than this.

“At the end of the day, developers run businesses, and businesses seek out markets where revenue opportunities are highest and the cost of building and distributing is lowest,” Peter Farago of Flurry writes. “In short, Android delivers less gain and more pain than iOS, which we believe is the key reason 7 out of every 10 apps built-in the new economy are for iOS instead of Android.”

38% of iPhone sales are from former RIM and Android users

A new survey from the Consumer Intelligence Research Partners (CIRP) paints a potentially troubling picture for Android. CIRP looked at...