According to TmoNews, T-Mobile is going to launch a device called the “Samsung Galaxy S Blaze Q” on August 15th. No, we didn’t make name that up. As you can see from the photo below, it’s quite … nasty. Under the hood though it’s quite a capable device. There’s a dual core Qualcomm Snapdragon inside purring at 1.5 GHz (S3 or S4, we don’t know yet), Android 4.0 Ice Cream Sandwich, a 720p display of an unknown size, and a 5 megapixel camera. What makes the Galaxy Barbecue GI-Joe Edition stand out is the physical QWERTY keyboard. Android phones with physical keys are few and far between. Most people have made the switch to full touch devices, but there still a few people out there who swear by tiny plastic chiclets to bang out an email or a tweet. If you’re one of those people, the Galaxy Sneeze Bless You is right up your ally. 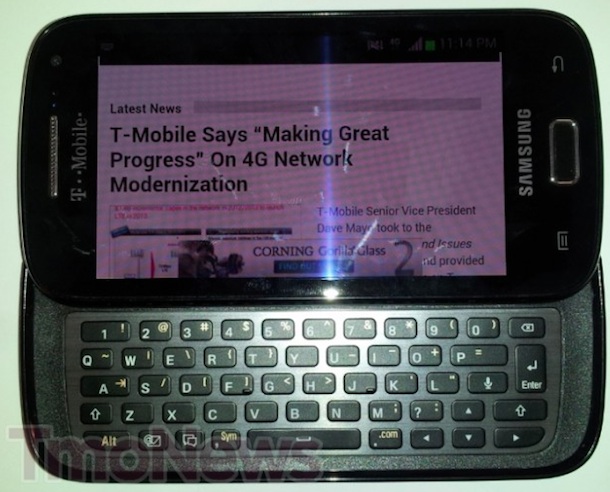 Now for the important questions: How much is it going to cost and should you buy it? With the little information we have about this thing it’s hard to come to a conclusion, but let’s just confess that we think everything that isn’t a Galaxy S III or an iPhone just isn’t worth your time. Most folks in America buy a phone with a 2 year contract. That extra $100 or $200 you’ll pay up front for a better device is meaningless in the grand scheme of things. Making yourself suffer with an inferior device because you can’t stop visiting your local Starbucks on your way to work is just inexcusable in today’s age when your smartphone is easily your most heavily used computing device.

Anyway, we know our advice is going to fall on deaf ears for people committed to the QWERTY form factor. Hey, at least you’ll buy this thing and not a BlackBerry.