Back at BlackBerry World, RIM announced that it was seeding money to developers in an effort to get them to develop applications for the company’s upcoming BlackBerry 10 platform. Since that time, the company’s very future has been placed in doubt. RIM has delayed the launch of BlackBerry 10 from fall 2012 to early 2013, has seen its market share in the smartphone market plummet to 8%, and has hired JP Morgan and RBC Capital to strategically assess next steps for the company.

Despite the lures of cash investments and a $10,000 app sales guarantee from the company, more developers have given up on the company, and are turning towards more profitable alternatives. A new survey released today by Baird Equity Research found that developer sentiment towards both the BlackBerry 7 and BlackBerry 10 platforms reached a new low in Q2 2012. On a scale of 1 to 10, 10 being an excellent outlook, RIM’s savior BlackBerry 10 platform fell from 4.6 in the previous quarter to 3.8 this go around. BlackBerry 7 featured a similar decline, dropping from 3.8 in Q1 to 2.8 in Q2.

To put these numbers in perspective, iOS leads the way with a 9.3 rating, followed closely by Google’s Android at 8.7. Microsoft’s Windows Phone 7 platform was at 4.2, though Windows Phone 8 was not measured. Windows 8, by contrast (which could include WP8) was strong at 6.3. 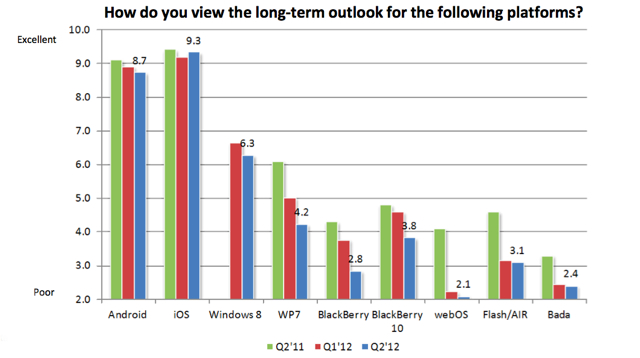 One third  (31%) of BlackBerry 10 developers are planning on abandoning plans for developing BlackBerry 10 applications, which while down from the previous 2 quarters is still surprisingly high considering several of those surveyed in previous quarters likely already abandoned plans for BlackBerry 10. Clearly, the thought of developing for BlackBerry 10 is becoming less and less a prospect for app developers, who would rather develop for platforms they believe will be more successful in the future.

Of course, RIM disputes the numbers, noting that the number of application vendors has grown 157% in the last year, and that the company’s BlackBerry Jam World Tour has been highly popular in cities around the world. RIM could be measuring the total number of development companies with BlackBerry apps regardless of activity, which would account for the seemingly contradictory growth the company is reporting.

Regardless, RIM has a tough road ahead if its going to be successful with the BlackBerry 10 product, and they’ll need developers on board to build the applications consumers want in their next device. And if recent reports are to be believed, they might have a much harder time getting developer support than they previously expected.

[via All Things D]

Who will acquire RIM? [Infographic]

RIM has seen better days - from Canada's most profitable company to numerous layoffs and stock plunging to record lows....