Back in the day, Samsung was a capable smartphone maker, but it wasnt a star. It made a lot of feature phones, but pumped out smartphones like the mediocre Samsung Saga. Now, though, Samsung is a household name thanks to Google and its Android operating system. A recent tweet by Horace Deidu of Asymco points out how much Samsung has changed in just the past few years. According to Deidu, about 54 percent of Samsung’s phones are smartphones, which is up from 3 percent a mere two years ago. 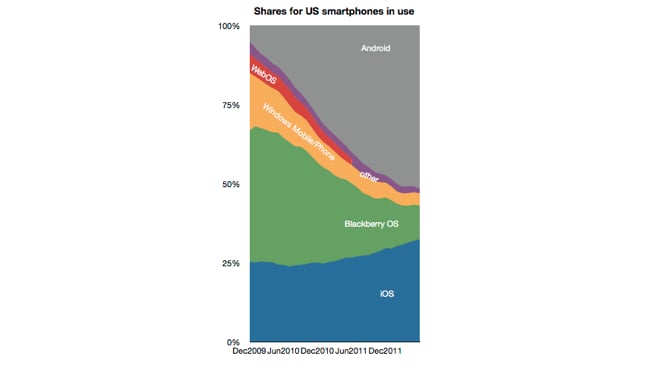 The Korean company’s success has turned the mobile marketplace into a two-horse race with Apple and Samsung more than doubling their combined market share over the past two years. As shown above in another graph from Asymco that represents Comscore’s Q2 2012 numbers, iOS and Android, led by Apple and Samsung, are literally eating up the competition in the US.

[Via Asymco and IDC]

Google Wallet updated with compatibility for all major credit cards

Google Wallet just received a major update to include a feature that was preventing so many people from signing up...