We knew it was on its way via the FCC and Motorola’s own slip up but we finally have a couple of real photos of the Droid RAZR HD. And what do you know? It looks like a Droid RAZR with a few cosmetic changes, but it’s what’s on the inside that might woo potential buyers.

Expect the RAZR HD to essentially be an updated RAZR Maxx and not much more. Still, the changes that we will likely see from the handset are going to be worthwhile for most, like an HD display for starters. Said display will likely be the exact same ColorBoost display that we recently saw ship on the Motorola Atrix HD, and it’s definitely a step up from the qHD AMOLED panel the past two RAZR handsets were working with. We’d also imagine that the RHD will be rocking a faster CPU and retain the larger battery that has made the RAZR Maxx such a hit.

To no one’s surprise, the back of the handset is covered in kevlar, which has become one of Moto’s materials of choice for its new handsets. In fact, we’d go as far to say that the back of the device looks better than any Motorola device out there currently. 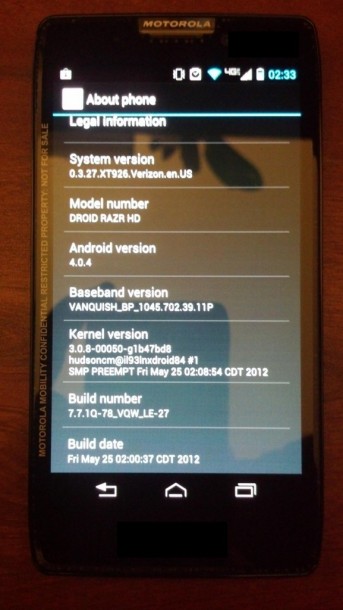 Like the Atrix HD, the Motorola RAZR HD will also be shipping with Android 4.0 Ice Cream Sandwich out of the box, and of course LTE. We have some rather significant doubts that a majority of people will opt for Motorola’s offering over the Samsung Galaxy S III, but that bigger battery may sway quite a few.

The Android numbers are in, and as you'd expect, not much has changed. The updated chart still shows Android 2.3...