Tmonews’ David Beren was sent two leaked memos reportedly out of T-Mobile’s internal systems yesterday which suggests that T-Mobile USA might once more be on the outside looking in when it comes to the iPhone. In a training document obtained by Tmonews, T-Mobile is educating its customer sales team on “selling against the iPhone” starting September 21st, the oft-rumored-but-not-quite-confirmed release date for Apple’s next iPhone. 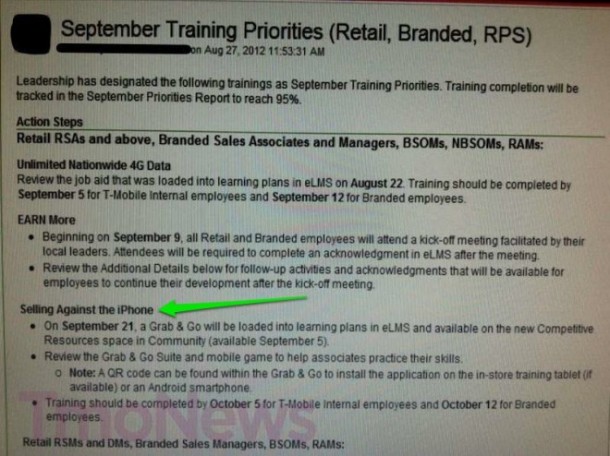 While certainly not telling in and of itself–carriers tend to hate the iPhone since they end up losing more money on the subsidies than other phones, and sometimes push customers toward more profitable devices–the second document obtained by Tmonews lends a bit more credibility to T-Mobile not getting the iPhone. The memo is a screenshot of an upcoming ad campaign T-Mobile plans on running that shows potential AT&T customers how much money they’ll save over the life of a two-year contract if they bring their unlocked iPhone to the T-Mobile network. 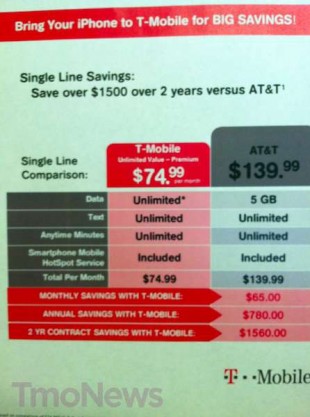 Taken together, it’s looking more and more unlikely that T-Mobile USA will carry a subsidized iPhone once the device launches next month. Though not totally damning for T-Mobile’s bottom line, former CEO Philipp Humm has often stated that T-Mobile needs the iPhone, and not being able to secure a deal with Apple could mean more customer churn at a time when T-Mobile struggles to keep customers loyal. Of course, none of this is confirmed, and we’ll have to wait and see how this plays out on September 12.

Everything Everywhere teams up with MasterCard for NFC payments

UK carrier Everything Everywhere, the joint venture between T-Mobile and Orange, has announced a 5 year deal with MasterCard that...