A report coming from Chitika Insights keeps the Apple iPad at a very high position for web usage compared to the competition. Competitors like the Amazon Kindle line, Samsung Galaxy tablet line, and Microsoft Surface are all selling somewhat well (the latter not so much) but when it comes to actual usage, the iPad doesn’t just dominate, it completely annihilates.

The fact that Chitika was able to measure average tablet impressions per 100 iPad impressions and base an entire report on those metrics is sad enough. The winner among non-iPads are the Kindles, claiming 4.88 impressions per 100 iPad impressions. Galaxy devices have 3.04, Nexus devices have 1.22, and as you can imagine the numbers only get smaller from there. A few more notable ones: the BlackBerry PlayBook (remember that thing?) with 0.80, Microsoft Surface with 0.22, and HP Touchpad with 0.18. 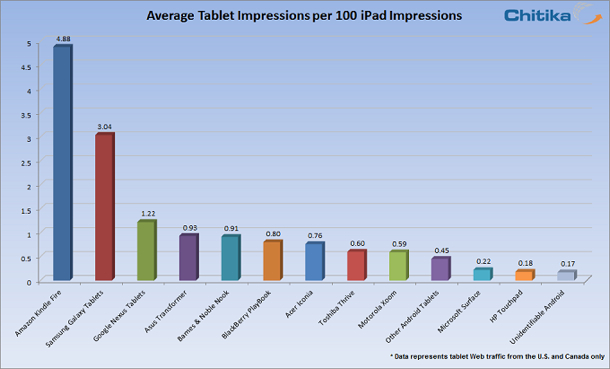 Web usage has grown for these devices, but not in any meaningful way that could impact the iPad’s share. The Kindle Fire line rose to a 4.25 percent web usage share from the 3.57 percent in November. The Samsung Galaxy also got a slight bump from 2.36 percent to 2.65 percent. “Users of Apple’s tablets still generate over 87% of U.S. and Canadian tablet Web traffic, coming down from just over 88% one month ago,” reports Chitika.

Holiday season sales, not accounted for in this report, are sure to have a large impact in Chitika’s next tablet market update.