“One in every two tablets shipped this quarter was below 8 inches in screen size. And in terms of shipments, we expect smaller tablets to continue growing in 2013 and beyond” said Jitesh Ubrani, Research Analyst for IDC’s Tablet Tracker. “Vendors are moving quickly to compete in this space as consumers realize that these small devices are often more ideal than larger tablets for their daily consumption habits.”

“Microsoft’s decision to push two different tablet operating systems, Windows 8 and Windows RT, has yielded poor results in the market so far,” said Tom Mainelli, Research Director, Tablets. “Consumers aren’t buying Windows RT’s value proposition, and long term we think Microsoft and its partners would be better served by focusing their attention on improving Windows 8. Such a focus could drive better share growth in the tablet category down the road.”

IDC also notes that the e-reader market is quickly becoming obsolete, with the increased popularity of tablets that provide e-reader functionality as well as other features. IDC is expecting e-reader shipments to steadily decline over the next few years, with it petering out at a more steady rate in 2015. 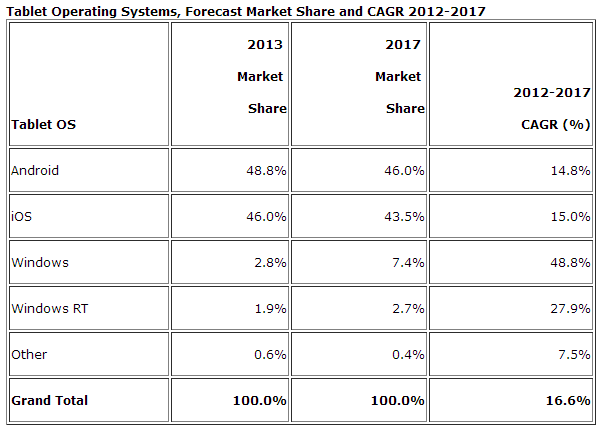 It looks like someone let the cat out of the bag a little early. Engadget got its hands on what appears...