Motorola is publishing a huge new newspaper advertisement for the upcoming Moto X tomorrow in all major publications. It doesn’t detail the phone itself since it’s clearly meant to be a teaser, but it sure does stir up excitement. The headline reads “The first smartphone designed, engineered, and assembled in the USA is coming.”

That alone is interesting, but the line that really gets me excited is “The first smartphone that you can design yourself.” That’s a pretty bold claim, yet vague at the same time. This could have multiple meanings behind it, but I think Motorola is definitely trying to give the impression that whatever meaning this line does hold, the Moto X going to be a big deal.

No other information other than a few short paragraphs of pep talk and a “coming soon” verification is present in the ad, but it’s all written very well. I’m reminded of Apple a bit, particularly the famous 1984 ad and the “Here’s to the crazy ones” speech. This is something that’s never been before, and I for one am greatly looking forward to seeing what Google and Motorola have in store for us.

Check out the full text of the advertisement for the Moto X in the image below. 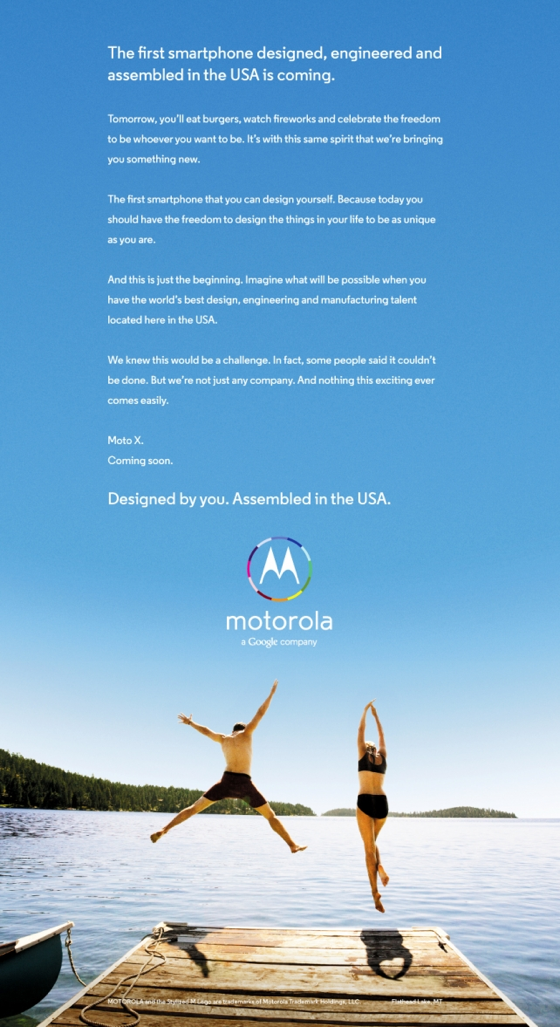 Benchmark Reveals Snapdragon 800 Powered LG-F320: Could This Be The LG Optimus G2?

A new LG device with a Snapdragon 800 processor has shown up in an AnTuTu benchmark today, although we're still...