Pacific Rim is a science fiction film that hits theaters Friday, July 12th. It takes place in the 2020s when monsters called Kaiju rose through portals in the sea and began attacking our civilization. To defend ourselves, humans created giant robots called Jaegars. Together with a heroic former pilot and trainee, the team must defend the world from monsters and save humanity. Oh, and your help is somewhat needed too.

The Pacific Rim game is in the iOS App Store as of today, so you need to fight those Kaiju too. Yes, it’s an interesting action game with gameplay similar to Infinity Blade. You play a Jaegar and you have to fight off monsters around the world using a variety of fighting moves. Let’s get into it.

When you launch the game in career mode, you’ll automatically start off in a tutorial mode in which the game will teach you the basic moves you’ll need to defeat monsters. You can swipe right or left for an attack, tap the left or right arrows to dodge attacks, tap and hold the middle to lean back, and swipe diagonally to perry. 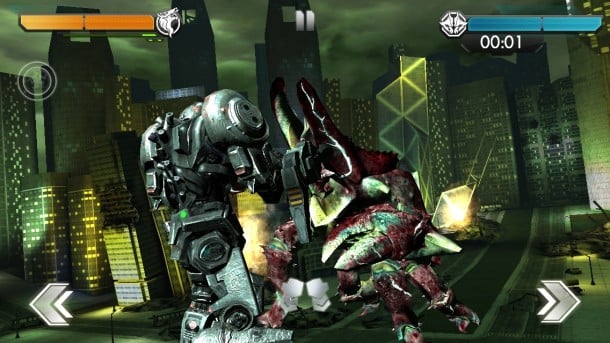 A typical worry I have for these types of games is whether I’m going to remember how to use all the moves. Luckily, with Pacific Rim, the controls are pretty easy to remember and they’re very natural too based on what actually happens in the game in accordance with your action. That’s good news for mediocre game players like myself.

As you continue to play, the monsters will get harder to defeat but you’ll gain new enhancements. A button on the top left will increase the damage each attack does on your opponent. The top right button will fire off a weapon at the monster, but needs time to reload between shots. Though I found the storyline to be a bit weak here, the game itself is pretty fun. It’s especially good for people who just like to stick to the fighting and cut through all the nonsense.

On the main screen of career mode, you can tap the top left tab to reveal plenty of gameplay options. You can choose one of five Jaegars to use in the game (if you unlock them all) plus switch out different weapons and skins and enable upgrades. It’s highly customizable, which I love in a game. The middle tab, K-Science, shows you stats about your opponents like height, weight, speed, and power. 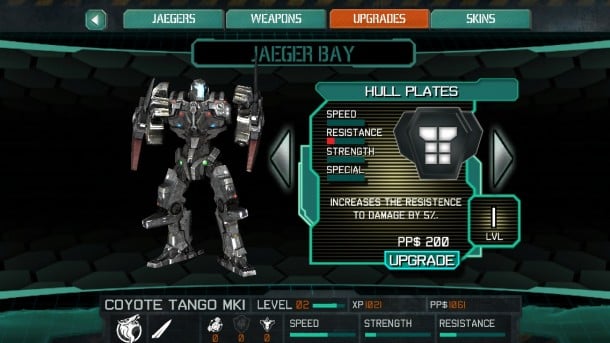 Pacific Rim’s graphics are arguably on the higher end especially for a mobile game. They aren’t perfect, but I am fond of all the detail on the characters themselves. Gameplay itself is quite smooth too with little to no lag or hiccups. That might explain why it’s not available for older iOS devices.

One aspect of the game I’m not a huge fan of is the design and layout. Not that it’s ugly, it’s just that a lot of the buttons on my iPhone 5 are quite small as are the counters for XP, in-game money, etc. It seems like the game was primarily designed with the iPad in mind first, where the button sizes would make more sense.

It’s also worth noting that outside of career mode, there’s a survival mode for fighting monsters one-after-one until you die, a stats area for checking out how your career is going, and the black market for buying more in-game currency (typically earned when completing battles or sharing stats) or just using it to buy power-ups for your Jaegar. Game Center integration is included here too so you can compare scores with friends.

Ultimately, the Pacific Rim game is an enjoyable new fighting game for iOS and it seems like a must-have if you see the movie in theaters. I’m told an Android version is on its way, but for now, the game is available for $4.99 in the iOS App Store for iPhone 4S and newer or iPad 3 and newer.

Update: Android version is live in Google Play for $4.99. Grab it here.