Google Glass isn’t something we usually associate with the fashion industry. Google’s wearable tech has generally been associated with, well, nerds. Not the “cool nerd” type either. But now fashion magazine, Vogue will feature a 12 page photo essay featuring models wearing AR glasses in its upcoming September issue.

Mashable reported that photographer Steven Klein’s spread is set on a deserted planet that has yet to be explored by humans. Robert Bruno’s futuristic looking Steel Horse is the setting for most of the photos. The shoot is artistic, but also will debut some new fall fashion picks.

While the fashion spread won’t feature the actual Google devices, Glass is the obvious inspiration for the futuristic head gear the Vogue models will be wearing. Each set of glasses are designed to match the model’s outfit and the setting of the image.

The inherent dorkiness of Google Glass has been lampooned on television and in Tumblrs like White Men Wearing Google Glass. Some of the “explorers” have done very little to help the accessory’s image either.

I’m looking at you, Scoble. 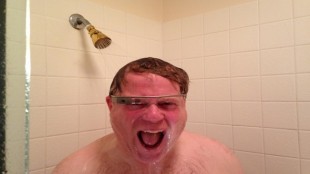 But that might all be changing. The same Mashable article points out that eyewear startup Warby Parker is working with Google to design frames for the next round of Glass that might be more appealing to fashion conscious folks.  Also Project Runway judge and Marie Claire’s Creative director, Nina Garcia recently announced that she’s be streaming New York Fashion week via Google Glass, making footage available on Vine, Twitter, Facebook, Instagram and Marie Claire‘s website.

The September issue of Vogue is on newsstands now

So what do you think? Can Google Glass be cool?

While most smartphone apps are focused on providing services for the first world, a new app called Peek is looking...