Upscale Mexican fast food chain Chipotle has made a point of choosing local ingredients and supporting small farms since its inception. Now the company is taking its message to mobile devices with a new iPhone and iPad game called Scarecrow.

The game is tied into a short film you can watch below, both depict the journey of a scarecrow attempting to bring healthy, local food back to the people. The scarecrow battles with Big Ag and factory farming corporations under the mega corporation, Crow Foods. His enemies are, naturally, crows.

The game is free on iTunes and as an incentive to play through, Chipotle will give electronic coupons to players who complete all the areas and gain 3 stars! 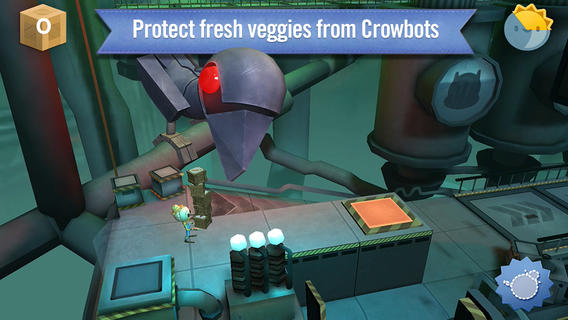 The press release and Chipotle’s short film follow below:

DENVER–(BUSINESS WIRE)–Chipotle Mexican Grill (NYSE: CMG) today launched “The Scarecrow,” an arcade-style adventure game for iPhone, iPad and iPod touch, along with a companion animated short film of the same name. Both the game and the film depict a scarecrow’s journey to bring wholesome food back to the people by providing an alternative to the processed food that dominates his world. The game and the film were created in partnership with Academy Award® winning Moonbot Studios, and CAA Marketing, a division of Creative Artists Agency. The game is available for free download in the Apple App Store and the short film can be viewed at scarecrowgame.com.

“The Scarecrow” film and game are designed to help educate people about the world of industrial food production that supplies much of what they eat. The film is set in a dystopian fantasy world where all food production is controlled by fictional industrial giant Crow Foods. The Crow Foods factory is staffed by scarecrows who have been displaced from their traditional jobs on the farm and are now relegated to working for the crows by helping them maintain their unsustainable processed food system. The short film is set to a remake of the song “Pure Imagination” from the 1971 film classic “Willy Wonka and the Chocolate Factory,” performed by Grammy Award® winning artist, Fiona Apple.

The game allows users to visit the animated world and correct the wrongs committed by Crow Foods. Designed for iPhone, iPad and iPod touch, the game allows players to fly through the city of Plenty to transport confined animals to open pastures, fill fields with diverse crops at Scarecrow Farms, and serve wholesome food to the citizens at PlentyFull Plaza, all while avoiding menacing Crowbots. With each level, the city of Plenty becomes more and more beautiful, just how the scarecrow remembers it to be.

“The more people learn about where their food comes from and how it is prepared, the more likely they are to seek out high-quality, classically prepared food like we serve in our restaurants,” said Mark Crumpacker, chief marketing officer at Chipotle. “We created ‘The Scarecrow’ game and film as an entertaining and engaging way to help people better understand the difference between processed food and the real thing.”

As an incentive for players to complete the game, Chipotle is providing food rewards redeemable at any of its 1,500-plus U.S., Canada and UK locations. The rewards are distributed electronically to players who earn at least three stars out of five in each world and are available on a first-come, first-served basis.

“Our companies are a great fit because we both care deeply about what we do and doing it right,” said Brandon Oldenburg, creative partner at Moonbot Studios. “At Moonbot, we must have meaning in what we create. ‘The Scarecrow’ story has it: imagination, heart and a sense of play.”

“In many ways, ‘The Scarecrow,’ represents what we aspire to accomplish through our vision of Food With Integrity,” said Crumpacker. “In a system that is so heavily dominated by industrial agriculture and factory farms, we are committed to finding better, more sustainable sources for all of the ingredients we use and to helping build a better food system, much the same as the character in ‘The Scarecrow’ is taking important steps to fix what he perceives as being broken in his world.”

Fiona Apple’s cover of “Pure Imagination” will be available for download at the iTunes Store with proceeds ($.60 per download) benefiting the Chipotle Cultivate Foundation, which provides funding to support sustainable agriculture, family farming, and culinary education.

The Scarecrow App is available for free from the App Store on iPhone, iPad and iPod touch or at www.appstore.com/scarecrow.

To learn more about The Scarecrow visit: scarecrowgame.com.

Steve Ells, founder, chairman and co-CEO, started Chipotle with the idea that food served fast did not have to be a typical fast food experience. Today, Chipotle continues to offer a focused menu of burritos, tacos, burrito bowls (a burrito without the tortilla) and salads made from fresh, high-quality raw ingredients, prepared using classic cooking methods and served in a distinctive atmosphere. Through our vision of Food With Integrity, Chipotle is seeking better food from using ingredients that are not only fresh, but that—where possible—are sustainably grown and responsibly raised with respect for the animals, the land, and the farmers who produce the food. A similarly focused people culture, with an emphasis on identifying and empowering top performing employees, enables us to develop future leaders from within. Chipotle opened with a single restaurant in 1993 and currently operates more than 1,500 restaurants. For more information, visit Chipotle.com.

Moonbot Studios is a secret, zero-gravity colony inhabited by interstellar beings in Shreveport, La. Their mission is to create the best books, films, apps, games, and entertainment in the galaxy. Award-winning artists and filmmakers William Joyce, Brandon Oldenburg, and Lampton Enochs cofounded Moonbot Studios in 2009. Since then, Moonbot has produced an Academy Award®-winning short film and two bestselling iPad apps, The Numberlys and The Fantastic Flying Books of Mr. Morris Lessmore. For more information, visit Moonbotstudios.com.

Future Samsung Phones will Have 64-bit CPUs Too, Says Exec

Apple announced its new iPhone 5S would feature the new 64-bit A7 processor at the company's event yesterday. Not to...