Target is joining the pre-paid MVNO game with a new prepaid wireless service which will utilize T-Mobile’s 4G LTE network. The service, which is said to launch on October 6th is dubbed Brightspot. Target will be offering three different plans, all of which are very affordable, although not much cheaper than T-Mobile’s current pre-paid offerings.

Here’s a breakdown of Brightspot’s plans:

In addition to affordable wireless plans, Target is offering up $25 gift cards for every six months in which a customer uses their service. Target will be selling micro-SIM and nano-SIM Brightspot kits, which can be popped into any unlocked GSM phone or one of Target’s offerings.

At the moment, Target will be offering the Samsung Galaxy S3, LG Optimus F3 and Optimus F6 for sale, with more devices on the way in the future. Device pricing has not yet been detailed. 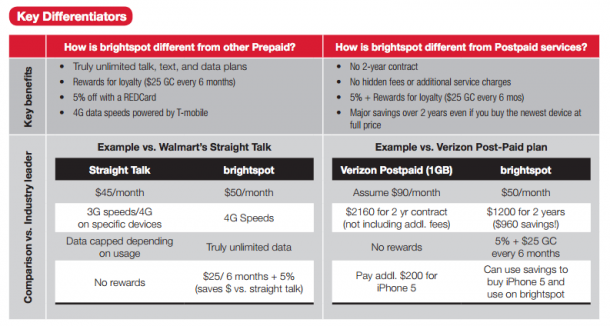 Google Play Music is now available in seven new countries, bringing with it an awesome collection of music to new...