If you spend much time lurking on the internet, you’ve probably witnessed Brody Ryan’s embarrassing video texting exploits. The L.A. based  rapper, photographer and developer’s sensual face-touching video has been blowing up Instagram and spawning tons of tongue in cheek copycats. (just search #StarbucksDrakeHands if you’re not familiar, you won’t regret it). Now it’s come to light that Brody has his DrakeHands all over the upcoming Android port of the Backdoor messaging app!

Truly a renaissance man, Brody has several interests. His hip-hop career is exploding (yes, this real) and he’s fashioned himself as something of a motivational speaker, espousing profound acronym-based positivity like “F.A.M.E.” (Find A Meaning in Everything). Apparently he’s an app developer too, and his Facebook page revealed his work on the Android version of Backdoor. 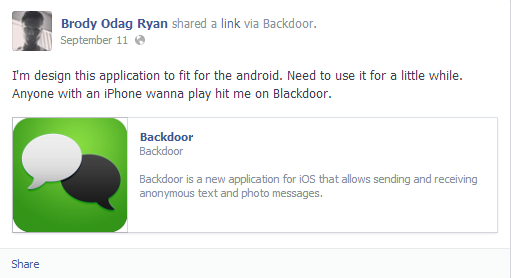 Backdoor provides discrete messaging using data to avoid SMS charges. The App allows for anonymous messaging but has unlockable “clues” that can hint at the messager’s identity. So, it’s more playful than a straight across messager like WhatsApp. Backdoor’s been out for iOS devices since this past summer, and it’s coming to Android (thanks to Brody Ryan!) soon

For more information check out the press release below:

“Backdoor” App Brings New Experience in Messaging to iOS
Bringing “total messaging freedom” to mobile devices,
recipients can try to figure out who anonymously messaged them via in-app “clues”

Los Angeles, CA, July 24, 2013 – Curiosity is the emotion that drives us and moves us to new
things. Paired with curiosity is discovery. Backdoor is a new app that launched today that is all
about discovery by allowing users to anonymously message and communicate with their friends.
Even though it is anonymous, it is not a one-sided experience, as the recipient can redeem
“clues” to find out more about who is messaging to them and as they try to figure out their
identity.
A “half-anonymous” messaging application, with patented technology, Backdoor provides a
easy, playful and intimate way for people to communicate with each other. It introduces a new
dynamic to traditional messaging, while allowing users to still have the familiarity of popular
messaging apps. Backdoor allows friends to communicate, in a fun, new way, while interacting
with their Facebook and Google Plus friends.
Backdoor, available on the App Store at App Link:
https://itunes.apple.com/us/app/backdoor/id659951602?ls=1&mt=8
Backdoor was created and designed by Daniel Singer, the 13 year-old tech “wunderkind” behind
YouTell.com, a popular, free web site that allows users to post questions and receive answers
and feedback anonymously from their friends, family and co-workers. Backdoor was created to
address the growing need for people to have a place to have a conversation, share personal
thoughts and feelings with their friends, without the need to disclose their identity. The app has a
US patent and three additional pending patents relating to “anonymous communications between
users.”
“I created Backdoor to allow people to interact with a different chat dynamic that allows for a
totally new way to communicate and share experiences with friends. I feel that when you remove
a key component of a conversation, like identity, you can come up with some pretty cool results
which last for a lifetime,” said Daniel Singer, creator of Backdoor. “When you send a message
on Backdoor you are not just sending a message but you are creating a moment, an experience, a
new discovery, not just for you but for the other person. You both engage with a radically
different focus, but yet communicate on the same medium with the same content. I think that in
of itself is truly extraordinary and can put a new spin on how people communicate.”
Backdoor is now available for iPhone and iPod Touch. There are plans to launch versions for
iPad and Android in the near future

Beyond the Dead – A Free to Play Zombie RPG for iOS