I have been to the world of Beyond: Two Souls, and I can say it is good. Not perfect, mind you, but quite good indeed. While a major improvement over Heavy Rain, the game still suffers from some of the same issues as Quantic Dream’s earlier title. It often feels like it’s on rails, and can reduce interactivity to quick time events and button mashing. But the sheer beauty of the game, the quality of the story, great performances from Ellen Page and Willem Dafoe, and some incredibly fun and satisfying sequences make the game worthwhile (and yes, worth your $60 bucks!).

I’ll be honest, this game pissed me off at times. It has its slow, clunky moments, poorly written dialogue, awkward controls and clichéd characters and tropes. None of this matters when you’re playing through one of the game’s incredible action sequences, or experiencing some of more compelling moments of the narrative. You might be a little bored making “Asian Beef” (yes, this is something you can do) or bringing water to sheep. Don’t worry, in a few minutes you’ll probably be choking people with your mind and fist fighting cops!

Quantic Dream has been experimenting with a formula since 2005’s Indigo Prophecy, mature themed interactive entertainment that’s as sweepingly cinematic as Hollywood films. Most recently, 2010’s Heavy Rain wowed with its eye-popping graphics and motion captured performances from real actors. But the game was criticized for its minimal interactivity, reliance on quick time events, and annoying control scheme.

Beyond: Two Souls raises the graphical bar even higher, and brings well-known actors into the mix. But it also addresses many of the problems of Heavy Rain, with varying degrees of success. The controls work a whole lot better, the story is more coherent, and it has many more sequences that feel like you’re actually playing the game.

The game is already polarizing critics. It’s Metacritic score is 73, but that’s including multiple perfect 100 scores, and marks as low as 25! Most people love or hate this game, there isn’t much gray area. I think this misses the point, the game is groundbreaking in many ways and a very satisfying experience. But it’s not without flaws!

Let’s get down to it, shall we? 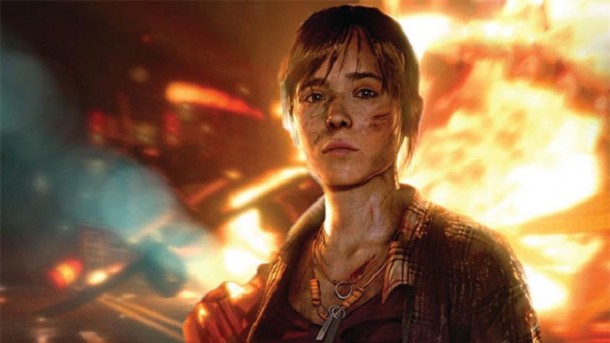 This game is absolutely beautiful, but you knew that already. The visuals and the incredible motion capture rendering of the game’s stars are the main selling points, and the focus of the ad campaign.

The game stars Ellen Page and Willem Dafoe, both of whom performed their parts with motion capture dots all over their bodies and faces. They were motion captured at an unprecedented level of details and their character models in-game look nearly real. It’s truly remarkable, especially the facial detail. 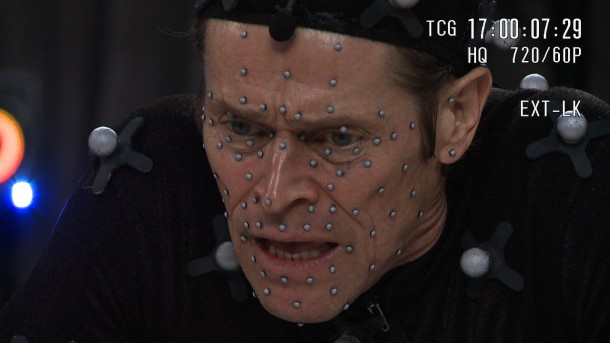 The locations are incredibly realistic too, and populated with NPCs who wander about like real people. The outdoor vistas are expansive and lovingly detailed as well. It’s incredible that Quantic Dream can pull these graphics out of the PS3. Part of this is achieved by a constrained perspective at times, and the load times are reminiscent of a PS1 game. But a city street feels alive and real, and riding a horse through the expansive Southwestern plains is arrestingly beautiful.

The aging PS3 is certainly not going out with a whimper, as the 7-year-old console dives into the uncanny valley headlong. Aside from a general shininess and some wubb-wubby pulsing video artifacts, everything looks incredibly realistic. Between this and The Last of Us, 2006’s claims about the power of the Cell processor finally seem to be proving true.

I can’t wait to see what Quantic Dream can do with next-gen hardware! 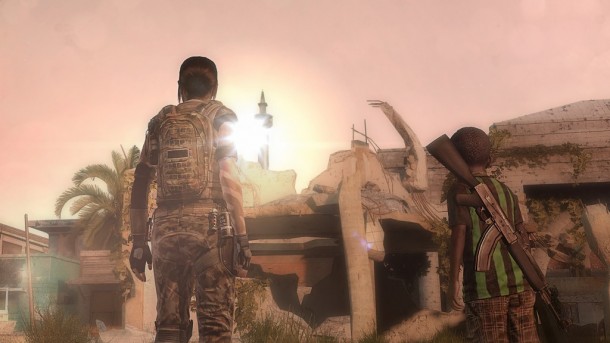 The story is compelling and the quality acting really sells it. It’s not nearly as profound as it portends to be, not by a long shot. It relies a little too heavily on clichéd emotional triggers and familiar movie tropes. But if it was a supernatural thriller in film form, I’d go see that movie. I’d enjoy it too.

You control Ellen Page’s Jodie, a woman who shares her life with an entity, Aiden. The two are intrinsically connected, Jodie was born with Aiden and only she can see or communicate with it. Aiden may be attached to Jodie, but the entity can move freely through the air around her, observing and affecting the people and objects in the area.

As you can guess, this make’s Jodie’s life a lot more complicated than most people’s. The narrative jumps around in time, as is the fashion of several films and TV shows lately, giving us glimpses of Jodie’s life at different moments. We see her birth, her childhood, her teenage punk rocker phase (!!), and her as a grown up young woman who has mastered her gifts.

Jodie’s childhood is rough, her parents fear her and leave her in the custody of Dr. Nathan Dawkins (Willem Dafoe). Dawkins performs experiments with her, testing the power of her abilities. Nathan and his assistant Cole become Jodie’s de facto parents and the three become something of a family over the years.

Of course, Jodie’s gifts are appealing to the powers that be, and she’s ripped from her home with Nathan and forced into CIA training. Of course, the CIA has her do all kinds of shady stuff and she runs away and goes on a journey of self discovery/blowing stuff up and crushing people’s throats.

I don’t want to spoil anything, but it’s in line with a lot of tropes in Speculative Fiction. You can see the influence of Akira, Carrie, even Ender’s Game. Still, it’s presented in an incredibly slick package, and Ellen Page really sells it. You’ve seen this stuff before, but it’s still compelling as hell, especially when there’s action mixed in!

And that is my main complaint, the long scenes without action often aren’t strong enough to support the lack of interactivity. Cooking Asian Beef and cleaning your apartment for a date might not be so boring if the date dialogue wasn’t so blah. Or if you could just choke your date with your mind…..

Anyway, suffering through some of the weaker scenes is worthwhile, if only for the promise of action scenes to come! The story is good, the acting is great, and possessing guys and making them shoot each other never gets old.

Which leads us to the control scheme. The short version: it works.

Beautiful as it may be, Beyond: Two Souls is also eminently playable. Its controls are similar to Heavy Rain, mapping several actions to the right stick and buttons in a context specific way. This time around, however, it works. A quick right tap on the stick might open a door or might throw a punch, depending on the situation.

Ellen Page’s Jodie character is controlled in the third person. Aiden, her supernatural buddy, is controlled in the first person. Most of Aiden’s powers involve holding the L1 button and some action with the L and R sticks. A second player can control Aiden as well, with the two of you passing the mic and switching between the entity and Jodie.

Just play it, it’ll make sense when you do. It’s a unique control scheme, but it really does work. The game holds your hand for the first hour or so, letting you really get accustomed to its controls. Because the controls change given the context of the situation, it allows you to do anything.

There’s also a much-hyped smartphone control scheme via the Beyond: Touch app. The app allows the player to use their smartphone as a 1st or 2nd controller, as long as it’s on the same wireless network as the PS3 running the game. Once tethered, the smartphone and enter commands using a simplified set of swipe, tap and hold controls. Unfortunately, I could never get this to work on my Galaxy S4.

There are a lot of quick time events, but they’ve also been streamlined into something that feels more interactive. You’ll need to press the right button at the right time, sure, but you might open a different story branch if you miss it.

Also, there are dialogue scenes that map different questions or responses to the face buttons. This works fairly well, and makes the conversations feel a little less scripted. 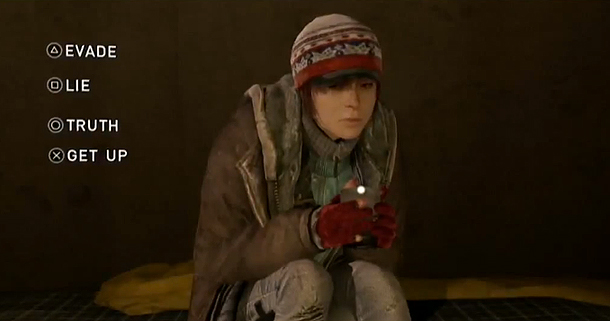 It works, and it’s fun. In particular, the final third of the game throws some incredible action set-pieces your way. You never get complete control, following an essentially linear path. But it’s fun as hell.

The replay value is ok, sort of akin to watching a movie over again, since the focus is on the story. I feel like I will play this game through again, but probably not anytime soon. It’s a satisfying experience, and in the end quite beautiful.

I would really love to see a more action-oriented sequel, or DLC. 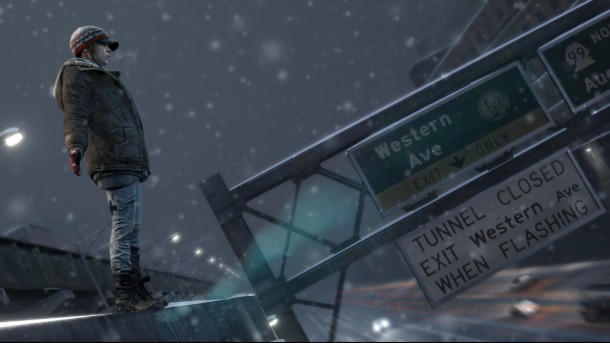 PS3 owners, Beyond: Two Souls is worth your time. In the waning days of Sony‘s console, it’s getting hit with an incredible lineup of games made by devs who know the hardware in and out. The visuals that Quantic Dream have pulled out of the aging  box are reason enough to give the disc a spin, but Beyond: Two Souls has more than just looks. It’s got brains and heart.

David Cage, the writer and director has been picking away at this game style for nearly 10 years, attempting to bring sweeping, cinematic, epic storytelling to the interactive realm. The game gets the formula mostly right and seems like the game Quantic Dream has been trying to make for all these years.

Beyond: Two Souls’ shows off a vision that’s matured into something great. It’s a rich, deeply satisfying experience that everyone should play through in spite of its flaws.

Ratchet and Clank: Into Nexus will Come with a Free Download of Quest for Booty!

With the Playstation 4's release coming soon, Sony's offering up all kinds of deals on its PS3. The latest is...