Many rumors concerning the date of the Nexus 5’s announcement have come and gone already. First, it was expected to be announced on October 5th, and most recently, October 15th. These dates clearly didn’t give us what we were looking for, but we’re still expecting the Nexus 5 to be announced this month.

Pricing has also seen its share of flip-flops as well for the highly anticipated smartphone. Originally, it was rumored that the handset would share the same price as the Nexus 4, starting at $299 and $349. However, the latest rumors peg the price of the handset at $399 and will ship alongside a new version of the Nexus 4 that’s LTE-enabled and has better storage options. This would definitely be an interesting move for Google, and possibly justify the Nexus 5’s higher price point. Offering two Nexus devices as multiple price points sounds like a great idea if you ask us, but we wouldn’t be surprised if it didn’t happen.

Of course, it’s not all rumors with the upcoming handset. We’ve seen the service manual leak for the device, as well as a ton of photos and a few videos for the device. 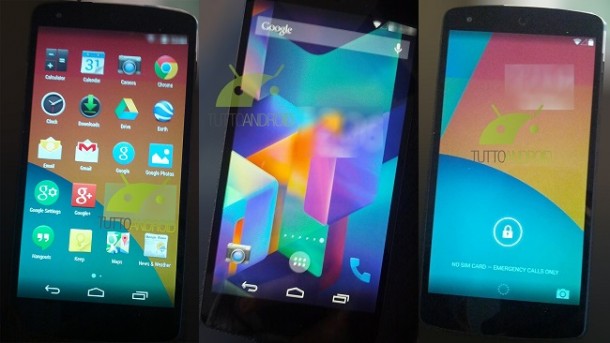 Even Google leaked the Nexus 5 during the KitKat statue unveiling event on the Mountain View campus.

All of the rumors surrounding the Nexus 5 will soon fade away. Your move, Google.

Be sure to check out all of the Nexus-related news below!

LG Device Passes Through FCC: Is This The LG Nexus 5?

Another Pic of the Alleged Nexus 5 Leaks!

Nexus 5 To Be Announced On October 5th?

Obvious rumor of the day: Nexus 5 coming next month with an affordable price tag

Leak: Hands On With the Nexus 5 and Android 4.4 KitKat!