LG’s upcoming curved handset, the G Flex, recently popped up in the results of popular benchmarking tool Antutu. While we’re pretty sure we won’t see the handset officially announced for a few months (maybe not), the specs of the device that were revealed in the benchmarks are enough to keep us excited about it.

According to the benchmarks, the LG G Flex is said to rock a 6-inch 720p HD display (244 PPI), Qualcomm Snapdragon 800, Adreno 330 GPU, 2GB RAM, and 32GB internal storage. These specs put it on par with a majority of the components of the LG G2, with the exception of the larger and lower resolution display. While we’d love to see the screen resolution of the G Flex get bumped to 1080p before its official debut, we have our doubts that it’ll stop anyone who wants to grab this unique device. 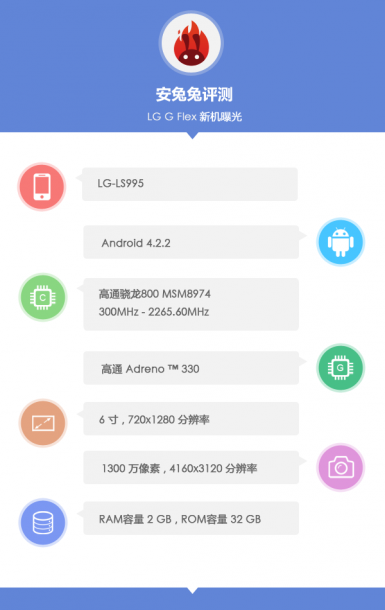 The G Flex’s biggest rival would clearly be the recently announced Samsung Galaxy Round, but we’re definitely more interested in LG’s offering. The design is reminiscent of the Samsung Galaxy Nexus, but the curvature of the display is far more pronounced. The curved display should provide a better experience when placing the handset to your face on a call, even if you might look a bit silly with a 6 inch display next to your head. Still, we’d be lying if we said the G Flex didn’t look pretty darn sexy.

We have our doubts that we’ll be seeing the G Flex debut this year, as the LG G2 hasn’t been out too long. LG likely wants to keep its flagship device as the lone rider and give it some time before we see another powerful smartphone hit the shelves. Of course, we’ll just have to wait and see exactly what LG’s plans are for the device.

Are you interested in the G Flex or in curved (not flexible) displays in general?